The Knutsford Rex Probus Golf section is centred on the annual Probus Golf Match that takes place every October at Knutsford Golf Club under Stableford rules. This is now a three-way competition between Tatton, Lumley, and Knutsford Rex.

The golf course is always in good condition, the food is always immaculate, and it is a very enjoyable event. In 2019 we came a close second to Tatton and one of our 6 man team carried off the individual trophy. There is a light lunch beforehand followed by prize giving and tea and scones after the match.

In preparation, during the summer (once or twice per month), the ‘non golf club members’ play 9 holes at Woodside in Cranage. The standard can be described not so much as ‘serious but not hopeless’ but rather ‘hopeless but not serious’. Nevertheless there is good banter, and the golf is always followed by an enjoyable cold beer.

New players are particularly welcome both for the informal 9 hole practice rounds at Woodside and as part of the team for the October competition. In 2019 we were a close second. It will only require a marginal improvement for Rex to carry off the team trophy in 2020. 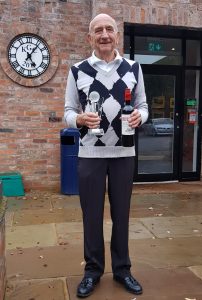 Neil Stott brought sporting glory onto himself and the Knutsford Rex Club by sweeping all before him and becoming the ‘Champion Golfer of the Year-2019’ with a majestic score of 19 points. Regrettably the rest of the Knutsford Rex team could not quite match Neil’s splendid effort by only coming second to Tatton Probus for the team prize.

Knutsford Rex Probus Club has participated in an annual golf match with Tatton Probus held in October at Knutsford Golf Club. This has been an individual Stableford competition, and it is true to say that the opposition has, in the past few years, run away with all the prizes. However, for 2019 the match is changing to a team competition, and is being opened up to include Plumley Probus. Plumley and Tatton have some pretty useful players and so, when the weather improves, it is hoped that we can get in some much needed practice. A few of us regularly play nine holes on a Tuesday (usually at Woodside in Cranage). A cordial welcome is extended to all potential Rex golfers to come and join us and hopefully foster a team spirit to stand us in good stead for the new event.