Peter, a member of Knutsford Rex Probus, started his talk with a brief overview of the origins of banking in the UK, starting with Sir Thomas Gresham, in Tudor times, founding the Royal Exchange, and the forerunners of banks – the Goldsmiths. The Goldsmiths developed cheques, balance sheets etc, which ultimately led to the introduction of banks as we know them.
Initially there was a clear demarcation between London and provincial banks, but in 1826, the advent of the telegraph system and dominance of the cheque, forced many small banks to merge to make the ‘big five’.
Peter then embarked upon a very humorous account of his banking career in Martin’s Bank, and the managers he had worked for. The first manager was very keen to avoid losing their biggest customer – Littlewoods Pools, but the second biggest customer was Liverpool Corporation. The bank managed all the coins collected from the buses. A large red van, with a roller door at the back, would deliver the newspapers to the newsagents, and then, after collecting additional staff from the bank, go round the bank’s customers, and the Corporation bus terminals, collecting all of the cash, before returning to the bank with over a £1m in the back of the van!
Peter gave a number of very humorous anecdotes including one where he was left to lock up the bank as his boss had to leave early. Realising that Peter needed the keys, the manager threw the keys over the counter. Peter left the keys where they had fallen until closing time, by which time it was getting dark, and the keys were in a shadow. Peter searched for the keys by feeling round the floor, and inadvertently set off a foot alarm, which he did not know existed. After convincing the local police officer that he was not a bank robber, they looked for the alarm control panel, and the policeman silenced the alarm by wedging some paper between some contacts inside the panel. The following morning, Peter found his boss at work early, looking rather the worse for wear. The alarm had gone off again at 4.00 am, after the wedge of papers fell out, and the Police had summoned him to deal with it!
Peter went on to describe how he became involved with the introduction of computers into the bank, and how things changed when Barclays took over Martin’s bank in 1969. This ultimately led to Peter leaving the banking profession, and setting up his own business.

24th September 2019 – Bowls – Appleton Probus v Knutsford Rex
Yet again the team was depleted due to holidays so with the bare minimum of 8 bowlers the task of beating the men from Appleton was not easy.
By the half time break Knutsford were 4 points in front of the home green bowlers but even though a close thing Knutsford eventually lost by 5 chalks 62-67.
This was the final fixture of the competitive season although a “friendly” Walkers v Bowlers match is scheduled for the Spinner & Bergamot green next Thursday at 1:30pm. 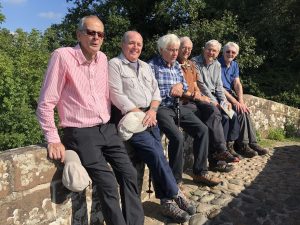 A timely rest at the 2nd of the 3 “Packhorse” bridges.
The latest Rex Probus walk was a five mile ramble starting at the Stamford Bridge Inn along the ancient packhorse route. Walking along the causeway across marshes which included three “packhorse” bridges to meet up with a section of the Roman Watling Street. An excellent lunch back at the Stamford Bridge Inn was welcome. 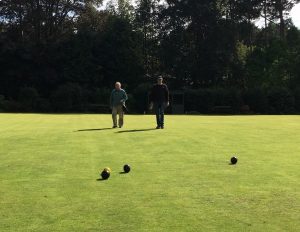 Early rounds with Ken Ackroyd taking on Albert Price.
The annual Individual Rex Club Handicap was played at the Knutsford Bowling Club on Wednesday 18th September. Fortuanetly the weather was kind so a good afternoons bowling was anticipated. 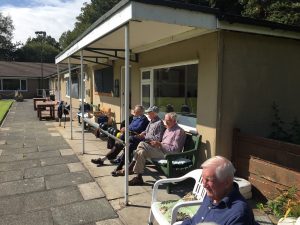 Spectators look on at the keen bowlers.
The format of the competition provides two games for each player with the top four then playing a semi-final. As it was a three way tie for the fourth semi-final required a four end play-off between the three bowlers. 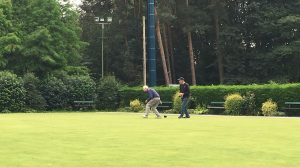 The final being played to the first to eleven with Roger Collins being in control throughout to win by 11 points to 6.
The trophy was presented to Roger by Club Chairman David Bryant. 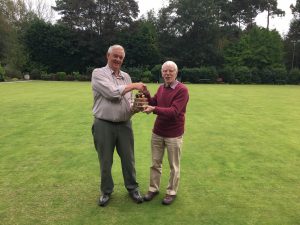 11th September – Bowls – Church Hulme v Knutsford Rex
Due to the club holiday and other bowlers also being unavailable a rather depleted team took on Church Hulme Probus at Cranage BC.
A final result of 61-51 to the home team was probably not a surprise especially as only six players travelled.
Next Wednesday 18th September is the Club Individual Handicap starting at 1pm Knutsford Bowling Club. 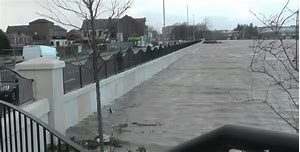 Mrs Brenda Fields and Mr Chris Jones from the Environment Agency gave a talk about the flood protection measures that the Agency had implemented in Warrington. The problem that the project set out to solve was flooding of homes and businesses by the tidal river Mersey, which runs through the centre of the town. The talk showed how the programme of work included embankments, walls and piling, and how they had managed to use the opportunity provided by the work to enhance the environment of, and public access to, the banks of the river. Of particular interest was the manner in which they had used rafts on the river to access otherwise inaccessible stretches of bank and the extreme measures taken to protect a major electrical sub-station. The whole programme took 5 years to implement at a cost of £34M.