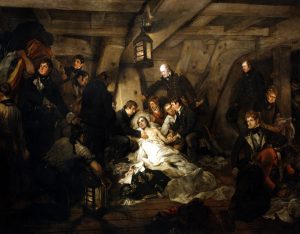 Tom introduced his presentation by stating that his fee for this morning will be donated to the charity ‘The Mission for Deep Sea Fishermen’.

Tom then showed a picture of Trafalgar Square in London, where the statue of Horatio Nelson faces down Whitehall, and ultimately across the Channel to France. The Square was erected 40 years after his death, and listed on the bronze plaques at the base of the column are his most famous victories, namely Cape St Vincent, The Nile, Copenhagen and Trafalgar.

Nelson was born in Burnham Thorpe in Norfolk. His father was the local vicar. As a boy, he used to regularly walk to the coast and watch the ships. Horatio Nelson was one of eleven children. When his mother died, his father had to raise the family alone and, unable to afford an Oxford education for Nelson, his father agreed to let him join the Navy at the age of 12!
Nelson joined his uncle’s ship, and prospered on board. He was an inspirational communicator at all levels. He then went on to join the Merchant Navy, where he made a big impression on Merchant Navy conditions, and then found himself in the West Indies with a minor command of small ships. There he married a widow and then, at the age of 22, went on to pass his Captain’s examination and took command of a frigate. Even at this age, he was convinced that he would become an Admiral, with his attitude of perseverance in spite of setbacks. He was then sent back home to England at the age of 30.

Napoleon emerged from the French Revolution with an ambition of world domination. Nelson was 35 when he was given command of a new ship and sent to join the Mediterranean Fleet to stop the French expansion. After 5 years, Nelson led the fleet in a conflict against the French at the Nile, where he took the French by surprise by attacking at night, and sailing between the French Fleet and the French Army on the shore. This cut the French Army off from their supplies and stopped their expansion into the Eastern Mediterranean.

It was at this time that Nelson met Emma, Lady Hamilton. His scandalous affair with Lady Hamilton could have been his ruin, but although the cartoonists of the day did not pull their punches, the British public had no appetite for the scandal. The public felt that Nelson was winning battles, and a national hero, and nothing else mattered!

HMS Victory had been refitted, with 104 guns spread over three decks, carried 4 acres of canvas and 27 miles of rigging, all looked after by 750 to 850 well trained sailors. She sailed with the rest of the Mediterranean fleet under Nelson’s command. They successfully kept the French Navy bottled up in the Mediterranean, until a gale blew them off course, allowing the French Fleet to sail into the Atlantic. Sailing under Admiral Villeneuve, the French fleet crossed the Atlantic to the West Indies, then on to Martinique, before sailing back to Ferrol in Northern Spain. All of this time, Nelson, using intelligence gained from the Merchant Navy and other sources, gave pursuit. Napoleon ordered Villeneuve to sail to Brest, to join his other ships, ready for the invasion of England. However, he decided to sail to Cadiz, where they found themselves blocked in by Nelson’s ships. When they tried to break free, Nelson was able to sail into the lines of the French and Spanish ships, firing at them at point blank range. Horatio Nelson was never an inconspicuous person, and a French sniper identified him on deck and shot him. Nelson died from his wounds, but in spite of their superior numbers, the combined French and Spanish fleets at Cadiz were soundly beaten. This victory kept the Atlantic supply routes open for Wellington’s Army, which ultimately defeated Napoleon at Waterloo, some ten years later. 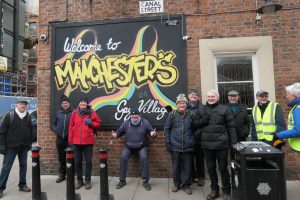 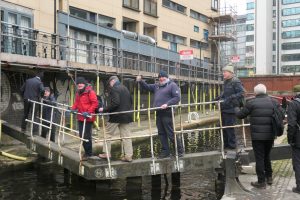 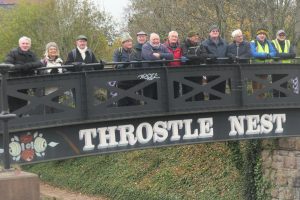 There were 14 members who travelled by tram from Altrincham to the Etihad Stadium, where they started the walk on the Ashton canal towpath, then on to the Rochdale Canal where they stopped for coffee. From here they walked through tunnels under Piccadilly to Canal Street and the Bridgewater canal, then on to Castlefield for lunch. They finished by walking to Throstle Nest Bridge, with views of Old Trafford, before catching the tram back to Altrincham. 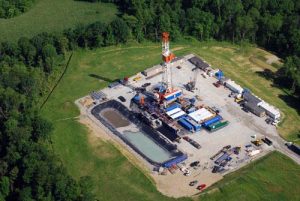 Allan started his talk with a brief résumé of his career up to his retirement 2 years ago. He then focussed on the imbalance with nature following the industrial revolution, and the need for carbon based fuels. This has led to extensive use of easily accessible oil and gas wells to the point where the rising cost of oil and gas has now made fracking financially viable. The fracking process has been around since the 1940’s, but it is a very complex process, which took 17 years to develop.

Allan then described the geological processes which led to the formation of oil and gas rich shale, and how the easily accessible oil and gas wells were formed below a rock seal. After showing maps which highlighted where suitable shale rock exists in the world and then in the UK, he showed a video which explained how the fracking process works.

Based on work on established wells in the United States, Allan said that the life of a fracking well is about 5 years, then the operator can either refrack in a different direction, or move to another location. The well head consists of a 1 acre concrete base, but when the drilling and pumping equipment, and all of the ancillary equipment that go with it are added, the whole site occupies about 10 to 11 acres. The fracking process requires a hole to be drilled, first vertically, and then horizontally into the shale rock. After drilling, a mixture of about 5 to 6 million gallons of water, sand and chemical additives are pumped down the borehole into the rock under extreme hydraulic pressure. This liquid is then removed, together with a cocktail of unknown additives from the shale rock itself. This releases the gas, leaving about 5 to 6 million gallons of waste fluid, which is probably very toxic, to be disposed of. In the US, this usually goes down an old well, and is sealed in by a concrete cap. However, there have been instances where the cap has become degraded over time, and the old wellhead has had to be continuously monitored.

Allan then described the impact on the local environment, including about 2,000 tankers for a 3 month period, followed by less frequent tanker movements, building pipelines to connect the gas to the National Gas Grid and, using a satellite image of a large fracking area in the US, the way that fracking wells spread once an old one is exhausted. Even on a satellite image, the industrialisation of a large area of landscape was obvious.

Allan also showed how the UK’s fuel economy paints a different picture. Renewable energy currently represents about 18% of the UK’s total electricity consumption. Coal fired power stations are being decommissioned and gas fired and nuclear power stations are bridging the gap. North Sea gas now represents about 40% of the UK’s gas consumption, the remaining 60% has to be imported in Liquefied Petroleum Gas ships, which themselves use significant amounts of fossil fuel.

He then added that if you look at Fracking from the ‘Energy Return On Energy Invested’ (EROEI) basis, hydro–electric power scores 100, conventional oil 20, fracking 10 – 14, solar power 6, and a Canadian process to recover oil from Canadian tar beds has an ERORI figure of just 3.

The seismic events caused by fracking occur 6,000 feet below ground, and in the UK, anything above 2 on the Richter Scale halts work. However, in the UK during the last 50 days, there has been 1 natural earthquake registering 4.2, 4 natural quakes above 2, and 7 registering between 1 and 2. In the UK, fracking is still in its development stage, and it is still unknown whether or not the present sites are viable, or whether or not the shale rock on which the well’s future depends, is suitable for fracking. The present situation is that there is a political moratorium on fracking in the UK whilst further research is being carried out. The future of fracking in the UK is firmly in the political arena. 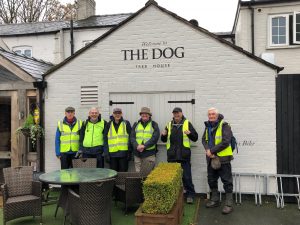 Seven intrepid walkers set off on a wet day from The Dog in Peover Heath for a walk of over 5 miles around the paths and tracks of Peover. Passing the landmark water tower, Lower Moss Animal Sanctuary, Colshaw Hall, Peover Hall and Grotto Farm before trekking back to The Dog for lunch.
The landlord had kindly reserved a table in a room with an open fire which was really appreciated as we were all feeling damp even though we had been wearing waterproofs. The food was excellent and the walkers enjoyed a well earned lunch with a pint of beer.

The walk had been organised by Andrew Allen who had to withdraw and David Howard led the walk in his absence.