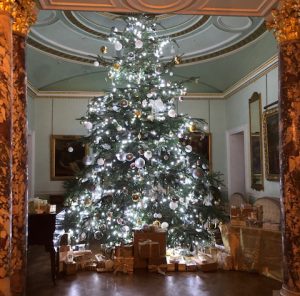 60 Members and their families enjoyed a trip round the festively-decorated Mansion at Tatton Park. This was followed by the excellent evening Christmas Concert put on in the Tenants Hall by the Northern Chamber Orchestra and St Nicholas RC High School Chamber Choir. This annual trip to Tatton at Christmas is one of the most favourite visits the club makes in its varied programme throughout the year. 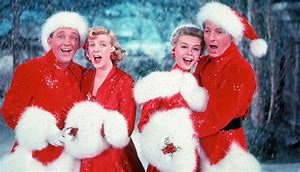 Geoff started his talk by informing the membership that the money for this presentation was going to the Christy Hospital, where he said they had saved his son’s life some years ago.
He then went on to describe how Irving Berlin had written ‘White Christmas’, and played an extract of the song being performed by Bing Crosby. This is still the most popular Christmas song ever written. Geoff then described how the second most popular song, ‘Rudolph, the Red Nose Reindeer’ was first produced as a colouring book for children, and then, after the reindeer had been named ‘Rudolph’, was put to music. He played a short extract from the original recording of Rudolph, sung by Gene Autrey.
Geoff then moved away from the commercial aspect of Christmas songs and gave the history of the origin of the carol ‘Silent Night’, written in Austria in one afternoon, about 200 years ago. Silent Night has crossed all boundaries, and been translated into many languages, and is rated as the most popular Christmas Carol. He also described how it brought peace between enemies in 1914, during the first Christmas in the First World War. The events of that day have since been very well portrayed in Richard Attenborough’s film ‘Oh what a Lovely War’. Geoff then played an extract from the film’s soundtrack.
The next piece of music he played was recorded at a Christmas concert in 1989. The music was written by Beethoven, and it was played in both East and West Berlin to commemorate the end of the Berlin wall, and the end of the division of East and West Germany.
This was followed by a recording of a lesser known piece of seasonal music by Elgar, called ‘Snow’, and then a piece of music written by an unknown Russian composer about winter. The music seemed to depict a steam train ploughing through the snowy countryside.
Geoff concluded his presentation by reading two poems, which reflected on Christmas past. The first was ‘Christmas’ by Sir John Betjeman, and the second was ‘A Child’s Christmas in Wales’ by Dylan Thomas. 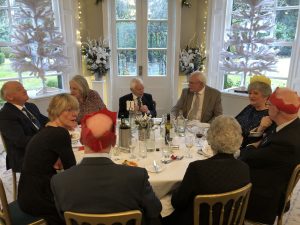 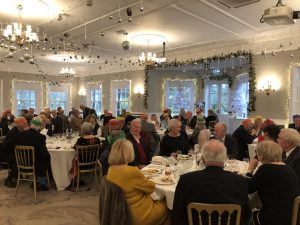 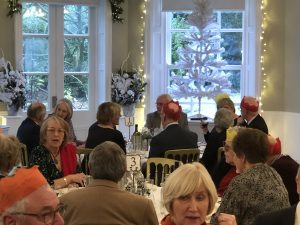 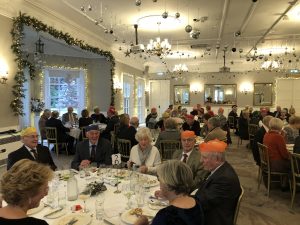 74 members, wives, widows and guests attended the annual Christmas Lunch at the Statham Lodge Hotel, Lymm. The standard of the food and service provided by the hotel were reported as excellent. The President thanked Barri Dodgson and Terry Parkinson for organising such a successful event.

The traditional annual Christmas walk through Tatton Park took place on 5th December and eight walkers walked a circuitous route around the park stopping at The Regimental Parachute Memorial.
A number of other members took a shorter walk in Tatton Park and 24 members and wives and partners joined together for a splendid lunch at Giovanni’s.