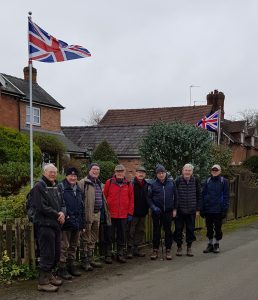 Nine members enjoyed a 5.5 mile walk in rolling Cheshire countryside around Whitegate. The walkers set off from the Plough Inn northwards towards Whitegate village, where they paused in the churchyard to remark on the variety of local surnames before moving on to New Pool, a notable angling feature. After a welcome coffee break they went northwest to join the Whitegate Way, on the line of a disused railway between Cuddington and Winsford. Working back southeastwards the group eventually returned to the Plough for an excellent well deserved lunch.

Philip started his talk with a brief history of Liverpool’s cathedrals. The need for a cathedral was recognised in 1850, and a suitable site was finally purchased in 1930. Sir Edwin Lutyens designed a very grand, large new cathedral, which was to be built on what had been the largest Victorian workhouse complex in the UK. Work on the crypt was started, but then halted with the outbreak of World War II. After the war, the cost of the cathedral had risen considerably, and a scaled down version was considered, but even that was too expensive. During the 1960’s Cardinal Heenan organised a world wide competition for a suitable building.
Sir Frederick Gibberd’s design won the competition. Philip then described how gaining on site experience for his Architect’s qualifications had led to him working for Sir Frederick Gibberd, and becoming involved with Liverpool Metropolitan Cathedral. He was appointed as the resident site Architect until it was consecrated and officially opened.
The circular design was based upon the concept of people being sat around a table at Mass, as in the Last Supper. The chapels were incorporated into the periphery of the building, with the circular baptistery by the main entrance. The original pre-war building was covered and preserved, but the part which supports the main building houses an underground car park. The building itself is built around 16 flying buttresses which support a lantern over the centre of the cathedral. The chapels fit between the buttresses and give the walls of the building its external appearance. Each chapel has its own internal entrance, surmounted by a ribbon of blue glass, which joins it to the rest of the building.
Philip gave an interesting and detailed account of the construction of the building, illustrated by a large number of photographs taken during the construction. He gave a number of entertaining anecdotes about the work as it progressed.
Philip also described the very moving experience when the building was consecrated. Cleaning and finishing work stopped, hard hats were removed, and the cathedral was no longer a building site.
Liverpool Metropolitan Cathedral was officially opened in May 1967, with the Duke of Norfolk representing the Queen. 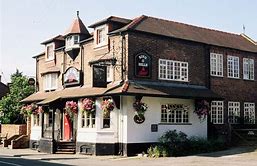 Seven walkers set off from the Ring o’Bells Pub in Christleton at about 10.25 after being delayed by a serious traffic problem on the A51. They set off eastwards through the fields at a brisk pace in fair weather, crossed the A51 into Vicar’s Cross Golf Course and paused for coffee on the outskirts of Guilden Sutton. They then turned westwards towards Chester Rugby Club’s ground, re-crossed the A51 and returned through muddy fields to Christleton where they enjoyed an excellent pub lunch at a 50% promotional discount, just as the rain came down.

Thirty people attended the afternoon tea at Knutsford Golf Club which was organised by Richard Fenby. They were served with a good selection of high quality sandwiches, scones with cream, and a wide variety of cakes. So plentiful was the fare that a few members took advantage of going home with a “Goody Bag.” 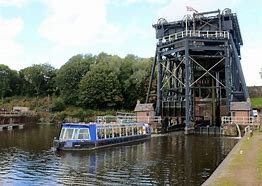 Dave introduced his talk by stating that he had been actively involved with the Anderton Boat Lift, and that he had been a lift operator from 2012 to 2014.
The salt mines in Cheshire drew on salt deposits which had been formed 200 million years ago. There are records of salt mining by the Romans.
In 1734, the river Weaver was adapted to make the river a navigable waterway. It was named the Weaver Navigation. Then, in 1777, the Trent and Mersey Canal was completed, and although it came close to the Weaver Navigation, it was 50 feet higher. There was a pressing requirement to get salt from the Cheshire mines to Liverpool via the waterways. Initially, it was transferred from one boat to another using barrows and chutes, a labour intensive and time consuming process. In 1872, the Anderton basin was built to accommodate more boats and chutes. Boat lifts did exist at this time, but they needed very solid foundations, which were not practical at this location. Edward Leader Williams was tasked with designing a suitable lift, and with the help of Edwin Clark, a hydraulics engineer, came up with a design using hydraulic rams to lift two caissons, each 75 feet long and 17 feet wide. The original cast iron caissons are still in use today. The lift was completed in 1875 and provided trouble free service for 5 years. Corrosion problems with the pistons led to a major redesign by Col J A Sanor, a hydraulic engineer, who recommended using electrical winches with counterbalance weights, rather than hydraulics. Apart from the costs, one of the advantages of this arrangement was that the lift would only be out of commercial operation for three short periods. The work was completed in 1908. Additional ‘A’ frames were added to take the extra weight, and 18 gearwheels were installed to drive the 1.25 inch cables between the caissons and the counterbalance weights.
Apart from replacement motors in 1946, following a flood, and replacement gates in 1958, it operated in this manner until it closed in 1983. A move away from commercial traffic towards leisure craft meant that from 1950 onwards it was becoming less profitable, and ultimately started seriously losing money. However, in 1976 it had been given ancient monument status. In spite of this, in 1983 the weights and gears were removed to lighten the load on the structure, and it was effectively abandoned.
Seven organisations, led by the Trent and Mersey Canal Society, then set about raising the £7m required to restore the lift. It was decided to use hydraulic rams again, both on cost and safety grounds. However, this time, the rams would be made of coated stainless steel, and the hydraulic fluid was oil, with the additional power coming from electric pumps. A National Lottery grant of £3.3 m and £430,000 raised by 2,000 private individuals all contributed to making the project viable. The entire lift was dismantled and re-assembled – using original materials where possible. It was then re-opened in 2002 by Prince Charles, and continues to draw leisure boats and tourists, but very little commercial traffic. The original gearwheels, now surplus to requirements, have been put back in their original location. However, the old counterbalance weights have since been relocated – to make a maze for children in the Visitors Centre.

9th January 2020 – Funeral of Rob Smallwood [ 1951-2019]
Rob’s passing on the 25th December 2019 was sad to receive at the festive period. Rob had fought bravely against bone cancer for many years and it was only a few months ago that he was still attending the clubs regular meetings. His illness eventually taking its toll. The club expressed deepest condolences to Rob’s wife Jane, children and grand children as well as many his friends. RIP Rob. [Members may read an obituary to Rob within the 9th January 2020 meeting minutes uploaded on to our Members Page.]

3rd January 2020 – Funeral of Mike Harrison [1938 – 2019]
The club was saddened to lose member Michael Harrison who sadly passed away on Friday 13th December 2019. Mike had been in good spirits the day before he died whilst attending our regular bi-monthly meeting. The club expressed their deepest sympathy to wife Patricia, children, grandchildren and to all Mike’s family and friends. Being a very active member of the club, as well as being an dedicated member of St Vincent’s Church in Knutsford, he will be greatly missed. RIP Mike. [Members may read an obituary to Mike within the 9th January 2020 meeting minutes uploaded on to our Members Page.] 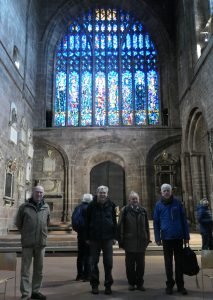 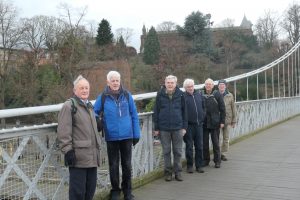 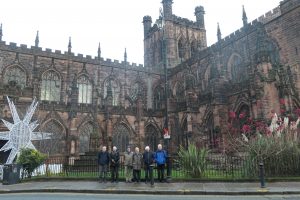 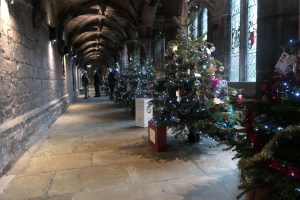 The first walk of the new year took place on Thursday 2nd January. It was a walk round the walls of Chester, with a brief detour to visit the Cathedral and an extension across the River Dee to Queen’s Park, just over five miles in total. Seven members of the Club took part in the walk, after travelling by train from Knutsford. After the walk the group enjoyed a customary pub lunch at The Old Harkers Arms on the bank of the Shropshire Union Canal before catching the train back to Knutsford.