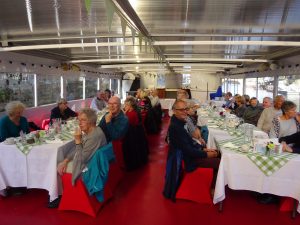 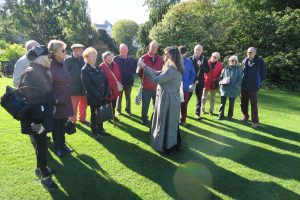 A hearty party enjoying an Ouse Cruise.         The party listen intensely to the Tour Guide.

Anthony Whitworth and Scott Martin kindly gave this report on this year’s Probus holiday.  A total of 34 members, wives and partners stayed at the 4 star Principal Hotel in York.

The weather was excellent. Most people went on the three organised tours: York Minster, guided tour of the City of York and a cruise on the Ouse.  They also visited the Shambles, National Railway Museum, Jorvick Viking Centre, Fairfax House and walked the city walls.

On the Wednesday, Barri Dodgson, an accomplished organist, was permitted to play the organ in the Chapel of the west wing of Castle Howard, and the following day, in a Methodist Church. Some of the group joined him to listen to his recital. On the Friday, a group of 10 returned home via the National Trust’s Beninbrough Hall, approximately 10 miles north of York, for a 3 mile walk and lunch before setting off for home. 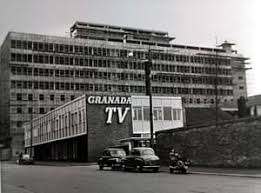 John started his talk with a brief history of his background. His interests in television and film started when he was about 9, and by 11, he was showing 9.5 mm films to his friends, in a garden shed, which he had made into a small cinema. In 1956 he attended the first Technical Secondary school in the country, and then, in 1964, after completing a photography course at Nottingham University, he started his career as a cameraman with Granada Television. Although John was promoted to Lighting Director in 1989, his talk was mostly about his experiences as a cameraman.

John showed some old aerial photographs of the Granada Studios site both before and after construction. Initially, Granada produced the weekday programmes, and ABC produced the weekend programmes, and they all went out live – there was no video recording in those days. All of the independent television companies were regional, and they had the option to accept each others programmes if they wished.  Examples of this included ‘The Army Game’ and ‘Coronation Street’.  Initially, Coronation Street was largely broadcast from inside the studio, with filmed inserts from location work at Archie Street in Salford.  This location work was later replaced by a scaled down model of the street inside the studio complex, once it became known that Archie Street was scheduled for demolition in 1968.  John then showed us some photographs, taken of the Coronation Street cast and staff, enjoying the 10th and 25th Anniversary Celebrations.

John described, with the aid of photographs, some of the methods used to obtain location shots, including being tied on to the back of a Range Rover’s boot. He also showed a photo of him dangling out of a helicopter, and on another occasion sitting on a small boat, filming artists in another equally small boat. He also described the problems of maintaining a ‘line of sight’ radio link, on a live show, from a Mersey ferry, which was travelling round in circles.

He concluded with a short video about the programme ‘Brass’, which was recorded at Lyme Park, where a special effect went wrong.

Congratulations to Terry Parkinson who is the 2018 winner of the Club Individual Handicap Event. Terry said on winning the event, ” When I look at the list of past winners I feel honoured for my name to go on the trophy.” Terry continued by thanking Roger Collins for organising the event held at Knutsford Bowling Club on the 19th September.

Speaker Mr Mike Hewitt, to talk about ‘Tolstoy – The Anarchist’ 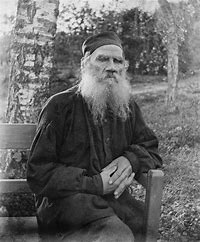 Mike started his talk with a short account of his visit to Russia for the Chernobyl Children’s Charity, and his introduction to Tolstoy’s life history. Whilst Tolstoy is famous for writing  War and Peace, this only covers part of a much bigger picture.  Tolstoy was a spiritual anarchist, who originally came from an extremely wealthy Russian family, who were favoured by the Tsars.

He was born on the 9th September 1828, the fourth of five children.  His parents died whilst he was quite young, and he was brought up by his relatives.  He lost half of his estate through gambling, and he joined the Russian Army, where he wrote a book about the Cossacks.  He found himself drawn into writing about the realities of war.  His work was published by a newspaper, and he became the first military correspondent. For the first time, the Russian population could read about the real horrors of war.  Reviled by what he had seen on the battlefield, he became an ardent pacifist, and refused to accept the social divisions between the wealthy and the poor. He shunned the established church, believing it to be corrupt and under the control of the Tsars. After examining original biblical documents, he was convinced that parts had been mistranslated, and wrote his own version.  He regarded the ‘Sermon on the Mount’ as the greatest teaching of all time, especially the part about ‘Love thy enemy’, which became the cornerstone of his life.

Tolstoy was a prolific writer.  He wrote numerous newspaper articles and novels, including his best known works, ‘War and Peace’ and ‘Anna Karenina’.  Tolstoy’s full works have been published.  Printed on quarto paper, the entire collection runs to ninety volumes.

In his private life, he was married, had thirteen children, eight of whom survived to adulthood.  He gave away large parts of his fortune to the local peasants, and helped 25,000 Baptists escape persecution from the Russian Orthodox church and settle in Canada.  He gave so much away, that towards the end of his life this led to major arguments with his wife, who thought that he was being far too generous. He died in 1910, but having been excommunicated by the Russian Orthodox church, he became the first Russian to be denied a Christian burial.  He was buried in the grounds of his ancestral home at Asnaya Polyana.  The police had to form a cordon to control the large crowds of peasants who attended his funeral.

Mike concluded by adding that Tolstoy had inspired some of the worlds great leaders, including Ghandi, with whom Tolstoy had corresponded during the final year of his life, and more recently, Nelson Mandela.

The Chairman then thanked Mike for his presentation, commenting that Tolstoy’s reporting of the Crimean War was the first time we really understood what war meant.

Mike then took questions from an appreciative audience.