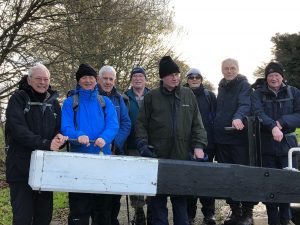 Nine members braved the initially wet and windy weather on a 6 mile walk around Wrenbury including the Shropshire Union Canal. The weather turned more pleasant in the later stages of the hike finishing with lunch at the Dusty Miller in Wrenbury.

On Friday 23rd November many members attended the funeral of ex Chairman Alan Jolley. Well in excess of 150 people crammed into the Vale Royal Crematorium Chapel to pay the last respects to a very well respected man. It was a sad day but the family and friends who stood to say a few words about Alan showed what a tremendous varied life he led with their memories conveyed with humour and fondness. RIP Alan Jolley 1934-2018.

Dr Maxwell started his talk with an outline of his career in the electricity supply industry, from 1948 until privatisation in 1988. He had worked on conventional power stations before joining the Nuclear Plant Design Branch, and then moving to the North West region of the CEGB as Reactor Fuelling and Development Manager.

Between 1962 and 1972, the UK commissioned 16 Magnox reactors. Between 1976 and 1987, 14 AGR reactors were commissioned. After privatisation in 1988, Dr Maxwell stated that forward planning had been shambolic, with energy as a political football.  Planned in 1981, the PWR reactor at Sizewell B was the last nuclear power station to be commissioned in the UK, in 1995.  The UK Government is now struggling to get two PWR reactors commissioned by a French Company, with finance from China.

He described the operation of the Magnox power stations, and showed how temperature limitations of the fuel rods restricted the turbine design and made them expensive.  Dr Maxwell then went on to describe the AGR reactors, which use ceramic fuel rods in stainless steel tubes, to enable higher reactor working temperatures to be used.  The early AGR reactors produced five times the power of a Magnox reactor, but this later rose to 160 times.  If the breeder reactor, which uses liquid sodium to transfer heat from the reactor to the water boiler, had been given the go ahead, this would produce 1340 times the output from a magnox reactor. He also described the PWR used at Sizewell B, where the water is pressurised to 2300 psi, so that it boils at 350 oC.

Dr Maxwell spent some time describing how nuclear waste was handled at the various levels, and also briefly touched on nuclear fusion as an alternative to the current nuclear fission. He thought that it would be 2050 before a feasible stable fusion process could be used.

He concluded his talk with an overview of renewable energy sources, and their limitations.  He highlighted the fact that nuclear energy can produce full power for 24 hours a day, regardless of tide, wind or sunlight.  In his view, the impact of the various forms of renewable energy on the environment is unacceptable, and the investment in this area needs to be reassessed.

Dr Maxwell then took a number of questions from an appreciative audience. 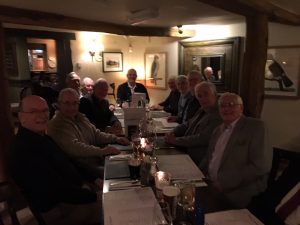 Members of the club’s Bowls Section enjoyed an evening at the Dun Cow in Knutsford to see off the end of a very successful 2018 crown bowls season.

Thanks were conveyed to Scott Martin and Terry Parkinson who organised the event. 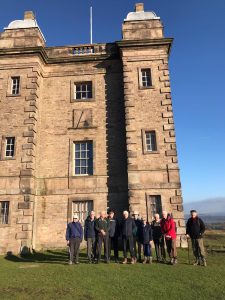 11 walkers took part, including 2 wives, commenced their walk at Lyme Park Hall on Thursday, 15th November. They climbed from the car park to the Cage, and enjoyed clear views of Manchester and Stockport, and were surprised to see a layer of air pollution around Manchester Airport. The group then left the park, walking through the outskirts of Disley before crossing the Macclesfield canal stopping for coffee at the Nelson Pitt visitors centre, before returning to Lyme Park. The group adjourned to the Red Lion, High Lane for lunch.

It was with regret that the club had to announce the passing of former Chairman Alan Jolley who sadly died on Friday 9th November.

Alan had been a member of Knutsford Rex Probus for 15 years and his service to the club was recognised by him being elected Chairman for 2017. 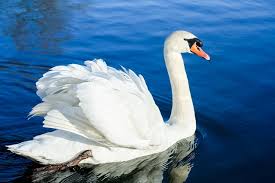 David started his talk by stating that his first interest in swans came from accepting a primary school headmaster’s post, where he found that he had direct responsibility for the swans on the local pond.  He then went on to describe the breeds of swans which visit the UK, including some from Iceland and Russia, which fly here for the milder winters.  Black swans are native to Australia and New Zealand, and those which have been imported to the UK, have their young in December and January, and face very difficult climatic breeding conditions.

The UK swan population has been in severe decline for some years, and David described some of the work which has been undertaken to find out why – including details of a lady who even used a motorised paraglider to follow swans on their migratory route from Russia, across Poland and Northern Europe, to the UK.  Most observation work is done by ringing the birds legs, and tracking their movements by watching where they land.  This has shown that they fly hundreds of miles in search of suitable areas to feed and breed.

Swans normally pair for life.  They nest near rivers, canals and lakes, and the pen lays seven eggs, one every two days over a two week period. Initially, the cob sits on the eggs for two weeks, whilst the pen feeds herself, before taking over for the remainder of the 35 day incubation period.  The cygnets hatch out, with help from the pen, within 24 hours.  During this period, the cob guards the nest aggressively.  Swans are very territorial, and normally nest a long way apart, but for some reason, in Abbotsbury in Dorset, large numbers happily nest within close proximity of each other, and records show that they have been doing so for 650 years.

David went on to describe some of the work which he had been doing with school children, including lake clearing and herding swans.  This provided a useful geography lesson for the children, as they tracked the movements of the ringed swans they had seen.

Swans mainly feed on grass, typically eating about 4 lbs a day. Their only known predators are mink, foxes and buzzards.

David concluded his talk with the methods of communication used by swans, how the pen gets her cygnets out of the water to ride on her back, and also the origin of the term ‘Swan Song’, when one of a mating pair of swans is widowed.

He then took a number of questions from a very appreciative audience.

The meeting discussed rechargeable batteries used in laptops, tablets and phones and had shared tips on how to look after the batteries and extend the battery’s life

The Discussion Group met on the 6th November, on the subject of “Nature or Nurture?” produced a lively debate.  They concluded that criminals are more likely to be affected by their upbringing than their genetic makeup. 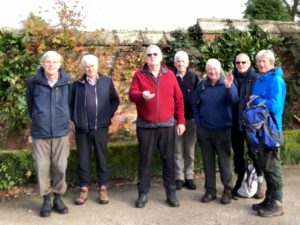 Members enjoyed a 5.5 mile walk at Peover on Thursday, 1st November.  The walk was through classic Cheshire countryside, from Peover’s medieval church to Peover Hall, and then back via Bate Mill.  The walk finished at the Bells of Peover, in time for a good lunch.

Also, on the same day, a group of members enjoyed a short walk at Redesmere.

The walk finishing up at the Egerton Arms in Chelford, where, due to a party booking for the main part of the pub, lunch was served in the Jones Deli