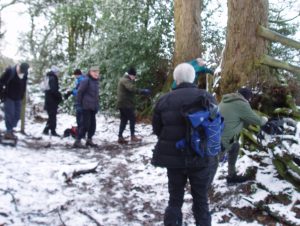 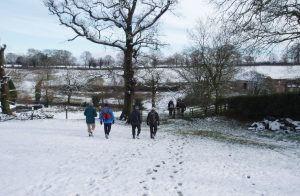 The day’s walk is Number One from the Knutsford Rex Probus “Book of Walks.”  The walk was about 4 miles long, with some styles and inclines, and was a challenge due to the snow and freezing conditions.
Club Meeting – 24th January

Speaker: Dr John Ackroyd, to give a talk entitled ‘The Invention of the Aeroplane near Scarborough at the time of Trafalgar’.

Dr Ackroyd started his talk with a quotation from the Wright brothers, who, after successfully demonstrating their powered aircraft, referred to work on aeronautics carried out by Sir George Cayley some 100 years earlier. The Cayley notebook was not discovered until 1926 and it became a Royal Aeronautical Society (RAS) paper in 1933.  Further discoveries were made in 1954, which became the subject of the RAS Cayley Memorial Lecture, and the contents of the most recent discoveries were published in 1962.
Sir George Cayley was born in Scarborough in 1783, and died in 1857. He was educated in York, then tutored in Nottingham and Southgate. He inherited his father’s title and estate, Brompton Hall, in 1802.
Many of the old ideas on flying had been based upon replicating birds, where both lift and propulsion come from the wings.  Cayley separated these, using fixed wings, paddles for power and a cruciform fin as a rudder.  In 1801, using a counterbalanced horizontal rotating arm, powered by weights, Cayley determined lift from a moving angled blade.  His results are consistent with modern wind tunnel measurements.
Cayley focussed on gliders, using the power of the wind and gravity. In 1804, using a combination of a kite, strapped to a bamboo pole, with a cruciform tail and a counterbalance weight, he flew his first glider down Brompton Vale (opposite Brompton Hall) at 15 feet per second (10 mph). In 1808 he built a better glider, and then in 1809, based upon the outline of a trout, he developed streamlining, and demonstrated that the tail end shape was just as important as the nose shape.  He also developed a glider which lifted a man, and in 1818, designed a glider with dihedral wings, which  gave stability, and a raised tail to give download.
During 1809 and 1810 Cayley published three papers in Nicholson’s Journal, which the Wright Brothers researched nearly 100 years later. These papers set out the basic scientific principles for aeronautics, based on aerodynamics, aircraft structure, flight dynamics and propulsion.
In 1849, Cayley produced a glider which carried a 10 year old boy.  It had a gondola suspended below the wings, with two tails, one on the wings for stability and the other on the gondola for steering.  In 1852, this idea was developed into ‘the governable parachute’, a monoplane glider with a boat shaped gondola below.
In 1973, a replica was built from the original drawings. It was flown, piloted by a glider pilot, and filmed by Anglia Television.  Dr Ackroyd ended his talk with the video of the replica being towed into the air, flying, and landing safely.  He concluded with a brief summary of the developments of aviation since Cayley.  He listed the Kitty Hawk in 1903, the Spitfire prototype in 1936 and then the Concorde some 30 years later.
Dr John Ackroyd then took questions from an appreciative audience.
Walk Lymm – 17th January
It was a sunny, but cold day, and the walk included a short part of the A50 and the footpath near the M56, before passing Lymm High School and going on to the Bridgewater canal towpath. They walk finished and the party drove to the Jolley Thresher, High Legh, for a good lunch.
Club Meeting – 10th January 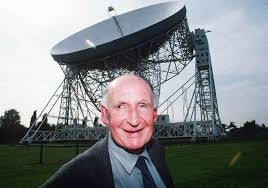 Ray started his talk with a brief background of his own recent past, and how circumstances led to his wife, Anne becoming Sir Bernard Lovell’s housekeeper for the final eleven years of Sir Bernard’s life. Ray became actively involved in driving Sir Bernard to many venues. He became a close friend of Sir Bernard, and consequently found out a lot of information about his background, including his interests in cricket and music and he regularly played the organ at Swettenham Church.

He stated that Sir Bernard had been born in Oldland Common on the 31st August 1913, and had been educated at the local schools.  He did not do very well at school, until a school visit to Bristol University introduced him to Professor A N Tyndall, giving a lecture and demonstration on electricity.  Sir Bernard was so motivated by this, that he became determined to study under Professor Tyndall, and quickly progressed from the lower part of the class, to the top. In 1931 he won a scholarship to study for a degree at Bristol University, and then went on to complete his PhD.  After this he was advised to broaden his horizons, and in 1936 he went on to accept a post as Assistant Lecturer at Manchester University.  He married in 1937, and had five children.When the war broke out in 1939, Sir Bernard worked for the War Ministry on radar systems.  The old klystron radar had not been as successful as had been expected, and work began on the ‘home sweet home’ radar system (H2S), which was ultimately installed in all bombers by 1943.  It was during the testing of this system, that Sir Bernard first picked up an unexpected signal, which is now known to have been cosmic rays.  The H2S radar system was a great success, enabling bombers to pinpoint targets in a way which had previously been impossible.After the war, Sir Bernard moved back to Manchester University, where he started building his first radio telescope.  Using numerous scrap parts which he had obtained from various war departments, he built the telescope at Manchester University, and found that there was far too much radio interference for it to work.  He then rebuilt it at the Manchester University’s botanical science park at Jodrell Bank.  There were a number of serious limitations with the initial design, so a new design was required, which ultimately led to the present Jodrell Bank radio telescope.  Sir Bernard Lovell then found himself at the centre of a controversy, after the telescope was modified to act as a possible early warning system, but the payment for the extra work was not forthcoming and the telescope ended up with a £0.25m debt.  A new chairman was appointed to the Public Accounts Committee, who knew the background, and decided that Sir Bernard had no case to answer.  The majority of the debt was then repaid when the Russians asked Jodrell Bank to track their spacecraft.During 1987, the telescope was renamed the Lovell telescope after Sir Bernard.  In 1993, his wife, Joyce Lovell, passed away.  Two years later, in 1995, Sir Bernard’s keen interest in cricket led to him becoming the President of Lancashire Cricket Club.  2007 saw the 50th Anniversary of the telescope, which had originally been designed to last just ten years! In 2009, Sir Bernard was awarded the Dalton Medal, the highest accolade that a scientist can receive. He died on the 6th August 2012.Ray Lowe then took questions from an appreciative audience.
Funeral of Member John Whittaker – 7th January 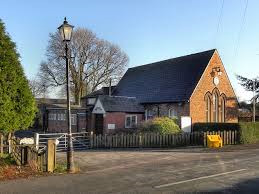 The 6.5 mile walk included the Trans-Pennine Trail, the Bridgewater canal towpath and the Swan with two Nicks pub before entering Dunham Park.  They then finished the walk at the Axe and Cleaver,  where they were joined by Donald and Sheila Johnson, and Anthony Whitworth, for an enjoyable lunch.