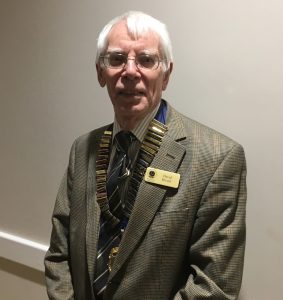 Ken Ackroyd has provided the Club with a wide range of speakers at its twice monthly meetings. This has been much welcomed by the membership who are appreciative of his continuing efforts.  The range and interest aroused is a great credit to him.

Fortunately, I have been blessed by a strong and tolerant committee. Richard Martin, although new to us, is a former secretary to a Probus Club.  He has been competent beyond description.  Terry Parkinson, Treasurer, who is also new to us, is a lifelong career banker who is familiar with the foibles of dealing with the public.  He has balanced the books impeccably.  The Club stands in very favourable terms for the next year.  The President, Dick Warwick, continues to give wisdom beyond the boundaries of many of the committee.  The other members of the committee, David Bryant, Vice-Chairman, stood in for the Chairman on a single occasion when absent on grandparents duty.  I’m sure he will be good for the Club in the next year.  David Howard, the Walks leader carried this role impeccably.  Alan Allcock revised the website without difficulty, benefiting the Club financially.

The Social Secretaries, Brian Williams and Richard Fenby, forming the Social Sub-Committee arranged excellent social outings during the year, with the York holiday having record numbers going on the holiday.

The Bowls section, Captain Roger Collins, had its most successful season in living memory. The Discussion group, Chairman Mike Harrison, always an active group, expanded to new attendance levels and to Ronald Burrows, a special thank you, the Dining Secretary, who has arranged all the meals throughout the season.

Sadly the Golf and Bridge sessions have been less successful with Andy Whitaker and Richard Fenby struggling to meet the demands of the encounters placed upon them, but for the moment they continue.

There was a general feeling that every person in the Club pulled their weight, which is a great feeling and a good outlook for the future. The Club remains in good shape with an activity list the envy of many Probus clubs.  The finances of the Club, in particular, remain favourable, despite a generous contribution to the Anniversary Lunch at the Court House.

Looking back over my first year as Secretary, there are three items which I feel stand out. The first was the General Data Protection Regulations, and the need for the Club membership and the Widows’ list to comply with the new regulations by the 25th May 2018.  The second was the production of the Knutsford Rex Probus Club’s Golden Jubilee book, and although my input was very small, I still feel that it was an honour to have been able to contribute to this venture. The final item is the tremendous work done by Alan Allcock in setting up Knutsford Rex Probus Club’s own web site, and releasing the Club from the financial commitments of the previous site.  I think that members will agree that Alan’s site is every bit as professional in its appearance and operation as the original site.  The main beauty of this arrangement is that it can be kept right up to date, without any of the monthly expenditure incurred for our old site, which has now been suspended.

The Knutsford Rex Probus Club’s membership this year has been a very mixed picture. Four new members have joined the Club, but sadly, four active members, including one of the new members, have passed away. In addition, Barry Drew, whose name was on our subsidiary list, has also passed away, as have the two former members Roy Slack and Jack Martland.  Our membership currently stands at 55, with just two members on the subsidiary list.

Finally, I must thank Jerry Bentley for his help and support. Not only did he give me very comprehensive guidelines at the start of the year, but he has also provided me with continued support throughout the last twelve months, for which I am very grateful.

Election of Club Officers and Section Leaders:  The following were elected to serve in 2019:

Reports from the Section Leaders may be found on their dedicated webpage. 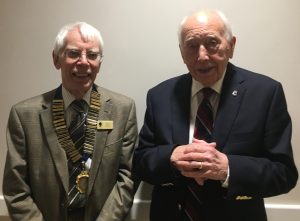 Bernard started his talk with a humorous comment about his own past, when in 1958, his professor advised him to concentrate on research, and leave patients alone!
He went on to say that historically, research into cardio vascular disease can be traced back to Roman times, when Greek doctors attended Roman patients – mostly soldiers.  The first person to fully appreciate blood pressure was a clergyman, called Stephen Hales, who in the 18th century, measured the blood pressure of his horse, and wondered why the pressure went up and down. It had previously been believed to be constant.

Bernard then described the early pacemakers – designed in Sweden during the late 1950’s, powered by mercury batteries, and issued to patients together with an alarm clock, as the batteries had to be replaced every 6 hours! Modern pacemakers have a sealed-in internal battery which lasts 15 years.  Up until 1950 there was no suitable treatment for high blood pressure.  However, an American doctor managed to get funding from IBM to develop bypass surgery.  The first machine was developed during the second world war, made of stainless steel the size of a large table, and could only be used once per week.  This has now been replaced by a disposable plastic bag system.  Each one is about the size of a shopping bag – costs £1500 – and enables three bypass operations per day.

Bernard gave his audience a good humoured history of the development of tubes used for grafting onto arteries and veins. He described how good fortune had enabled the development of current polyurethane replacement blood vessels, which are readily accepted by the human body.  He then continued with the history of the way in which iodine was found to be useful as an X-ray sensitive dye, capable of highlighting even the smallest blood vessels on x-ray displays.

Bernard then described how the heart operates, the use of ultra sound techniques to examine the heart, and the identification of heart problems.  Modern heart treatment is often carried out using catheters, and does not involve invasive surgery. He described in some detail how catheters can be used to replace the entire aortic valve, without the need to open up the patient’s chest.  He then touched on the topic of aneurisms, how they can be detected using ultra sound techniques, and the use of stents to prevent them bursting.

Bernard concluded his talk with a brief look forward.  There is development work on implantable heart pumps, which can give the heart a rest.  The human heart is then capable of repairing itself within 6 months.  There is also research into the zebra fish, which can have some parts of its heart removed and re-grow them in just 3 weeks.

Bernard then took a number of questions from a very appreciative audience. 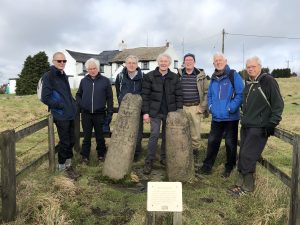 Eight of us travelled to Lyme Park using for a walk led by Scott Martin.  From the main car park we walked uphill on the Gritstone trail to the Bowstones, which are the shafts of what were Saxon crosses and landmarks and were used by Robin Hood and other to string their bows.  We stopped for a few minutes to enjoy the view from the Bowstones which are situated beside the old Ridgeway between Disley and Macclesfield overlooking Lyme Park, the Cheshire Plain, the City of Manchester and the Peak District. We then walked downhill on a quiet country lane to Dissop Head during which we watched a farmer training his sheepdogs. From Dissop we walked across paths and fields and alongside Bollinghurst Reservoir to Cockhead after which we re-entered Lyme Park and walk up to Lyme Cage and finally downhill to the car park passing the Stables and Lyme Hall on the way.

The weather was kind with a gentle breeze remaining dry and sunny throughout.  Lunch was at the Red Lion in High Lane. 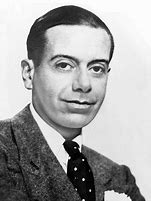 Brian started his presentation with a musical introduction of ‘Another Openin’ of Another Show’ – written by Cole Porter.

Cole Porter was born in June 1891, in the town of Peru, Indiana, USA.  His mother’s father was the richest man in the State.  Cole had a very privileged upbringing and was educated at Yale and Harvard.  He then went on to enjoy a playboy lifestyle in New York, as a member of the ‘Yale and Harvard’ Club.  This provided his introduction to Broadway.
His first Broadway success was called ‘Paris’. In 1917, he moved to Paris, where he met, and married Linda Lee Thomas.  Although Cole Porter was gay, they had a mutual respect and fondness for each other.  Homosexuality was illegal during his lifetime, so his gay lovers remained hidden.  However, the song “Night and Day”, written in 1932, has some unsettling notes, and is reported as giving an insight to his obsession with gay problems.

In 1934, the avant garde hit Broadway musical “Anything Goes” put Cole Porter amongst the great composers of Broadway.  He was offered work on movies, and moved to Hollywood, where he arranged and enjoyed lavish parties.  Linda found Hollywood society too shallow, and returned to her more sophisticated life in Paris.  Cole stayed in Hollywood.
When Cole was 46, he had a horse riding accident which left him crippled.  He moved to Waldorf Towers in New York, where Linda joined him.  He wrote a few productions which failed, before writing “Kiss me Kate” in 1948.

In 1954, Linda died, aged 71.  Distraught and suffering from ill health, he still managed to write “High Society”.  His leg was amputated in 1958, and he died in 1964 at the age of 71.
Brian concluded by stating that Cole Porter had written about love and life in an outrageous style, and his lavish parties were legendary.
Throughout his talk, Brian’s presentation was very well illustrated with high quality video excerpts from numerous musicals and shows, including ‘Paris’, ‘Anything Goes’, ‘Kiss me Kate’, ‘High Society’ and numerous other film clips, which showed many aspects of Cole Porters’ life and music. 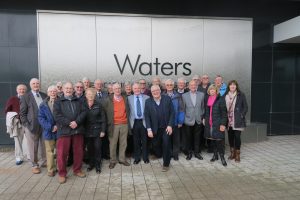 Global company, Waters Corporation made us very welcome on a tour of their European HQ and design and production facility at Wilmslow where some 600 people work of which 75% are scientists or engineers generating sales of c£300m pa. Waters is an international speciality measurement corporation, manufacturing analytical instruments and products for use in the chemical analysis of materials and complex chemical mixtures.  These products are used in food and water testing, in developing and manufacturing pharmaceuticals and the testing of specimens in hospital laboratories.

Members and their guests enjoyed lunch at the Honey Bee after the visit. 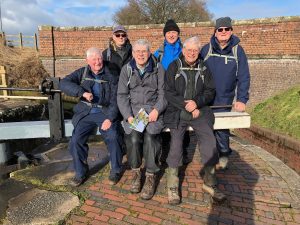 Six of us set off from Knutsford for the one hour / thirty-mile cross-country drive to Audlem for our six-mile walk across fields, quiet lanes and the Shropshire Union Canal.   We were expecting bad weather, but we were pleasantly surprised as it was dry albeit a little breezy at times.

We started the walk in the centre of Audlem joining by the canal towpath near lock 13. We headed North to the Marina and  Bridge 80 and then east towards Hankelow Mill and then south to Audlem Old Mill.  We walked back towards Audlem to the imposing Saint James The Great Church and then headed south again eventually arriving at lock 3 on the canal.  We then walked north along the towpath finally leaving near lock 13 returning to the village for a well-earned lunch at the Lord Combermere.

There was a comprehensive menu and the food was excellent but perhaps a little pricey.

Our thanks to Colin for organising and delivering this interesting and enjoyable walk. One thing about Colin’s walks is that we can always rely on him to choose a pub that serves a comprehensive choice of cask conditioned real ales!