Speaker, Mr Tony Flood assisted by Peter Ollerhead, to give a talk entitled ‘How Rolls Royce Came to Crewe.’ 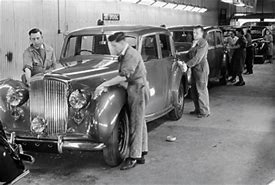 By the use of a copious supply of archive photographs Tony and Peter explained the development of the Crewe site from just before the Second World War through to the 1980’s. They explained that Crewe was chosen (rather than Shrewsbury or Liverpool) just before the outbreak of the war to be the site of a brand new facility to build and test the Merlin aircraft engine which had been developed by Rolls Royce at Derby.

By showing the astonishingly quick construction of the facility, the grand scale on which it was built and explained how people were brought from all over the country to work in the factory. They then went on, using further photographic material, to show the post war development of Rolls Royce Crewe as a luxury car manufacturer and to illustrate the social impact of Rolls Royce as an employer with its comprehensive employee sporting and social facilities. T

he talk was amply supported by the reminiscences of both speakers who had been employed at the facility for most of their working lives. The talk, and in particular the photographs illustrating working conditions in 1960/1970 UK engineering factories will have brought back many memories to those in the audience with an engineering background. Similarly the pictures of a series of post war Rolls Royce cars will have brought back memories to those in the audience who were car enthusiasts.

Bruce Marriot gave the vote of thanks which included his own reminiscence of his first experience of driving a Rolls Royce, an occasion that took place some time ago.

The members then showed their appreciation for an interesting talk. 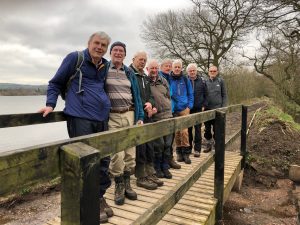 Ten members thoroughly enjoyed a walk from the Beehive Inn around Combs in the High Peakof Derbyshire. The group walked up Ladder Hill and the surrounding area ending along the footbath by Combs Reservoir. The weather was kind although the underfoot conditions were difficult at times due to mud.  Finishing back at the Beehive appetites were satisfied with a well earned lunch.

Speaker, Mr Neil Sheldon, to give a talk entitled ‘Alan Turing the Man and His Legacy.’ 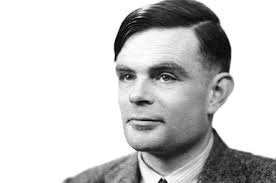 Neil started his talk with a brief overview of the things that most people know about Alan Turing. He then stated that he wanted to look at the broader picture.

Alan Turing was born in Paddington on 23rd June 1912. His parents worked in India and Alan was brought up in the UK by his relatives, before attending boarding school at Hazelhurst in Sussex, from 1918 to 1926.  After a trip to his parents home in France, he then went to Sherborne School in 1926.  Arriving at Portsmouth, by ferry, at the start of the General Strike, he only got as far as Southampton. Here he bought a bicycle and maps, and over two days, made his own way to Sherborne, where he studied until 1931.  He did not do well at school, and had to take his higher school exam three times before passing.  He then had to have two attempts at the Cambridge entrance exam, before being accepted in 1931 by Kings College, Cambridge.  Here he blossomed, and became one of the few undergraduates to deliver a paper to the Moral Sciences Club, a philosophical Society, arguing that Bertram Russell’s mathematical logic theory was wrong.  This argument was subsequently proved beyond doubt by his Central Limit Theorem.

In 1936, he designed the Turing Machine – a theoretical model that has since been built, and is now the basis for all modern computers.  The machine was controlled by a logic controller and believed to be capable of doing all calculations.  This was the start of computer programming.

After getting a first class honours degree in mathematics in 1934, Turing gained his PhD in 1938 at Princeton University with a dissertation entitled ‘Systems of Logic based on Ordinals.’

During the second world war, Alan Turing worked with a number of code breakers at Bletchley Park.  Using work done by the Polish intelligence, before the German invasion, they developed and improved the Turing Bombes that successfully decoded the Nazi Enigma machines messages from 1940 until the end of the war.  Whilst the source of the information from Bletchley was never revealed for security reasons, it did become trusted, and saved countless lives.

Towards the end of the war, Tommy Flowers, a Post Office Engineer, designed and built Colossus, the first computer.  Alan Turing saw its potential, not only as a wartime decoding machine, but the start of computer development, possibly capable of outsmarting the human mind.

At about the same time, Turing had managed to find a way of encoding speech, making it possible to talk directly by telephone, using a secure encryption system.

Neil then went on to describe the inaccuracies in the film ‘The Imitation Game’, which was about Alan Turing.

After the war, Alan Turing worked at the National Physics Laboratory at Teddington. He was directly involved in the development of ACE, a computer which could be programmed to carry out a variety of tasks, rather than being dedicated to one function.  Its development became entangled in politics, and Turing left to take up a post at Manchester University. Here he worked on a program for a computer nicknamed the Manchester Baby.  He also developed a means of differentiating between a machine’s intelligence and human intelligence.  This is now called the Turing Test.

In 1952, following a robbery at his home, Alan Turing’s private life led to the discovery of his homosexual tendencies, and he was prosecuted.  He was subjected to a course of medical treatment, and was subsequently denied access to all secure areas.  He found it difficult to work without a computer.  Turing did, however, produce a paper about a mathematical model to explain the biochemistry of gene theory, which turned out to be 50 years ahead of its time.

A year after completing his medical treatment, Alan Turing was found dead.  The records of the time suggest suicide by poisoning from potassium cyanide, but later investigations have shed doubt on this – it could have been by accident.

In 2009, Gordon Brown declared that Alan Turing’s treatment had been totally unfair.  His work gained official recognition and he was granted a Royal Pardon in 2013.  Neil listed numerous other areas of recognition.

Neil concluded his talk by giving his view of Alan Turing’s Legacy: 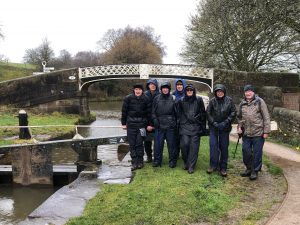 Eight of us went on a 5.7 mile circular walk organised by our intrepid walk leader, Terry Parkinson, starting and finishing at the Hollybush Inn at Denford near Leek in Staffordshire via the Caldon Canal fields and tracks and Cheddleton. The weather was wet and windy with lots of mud, glorious mud! We had lunch at the Hollybush Inn at Denford where we were welcomed with a blazing fire, good ale and good food. This gave us the chance to dry out!