This game was postponed due to the wet weather. The match has now been re-arranged for Wednesday 14th August, 6pm. 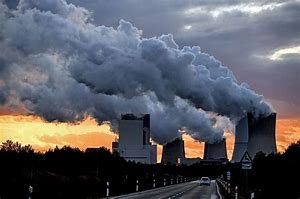 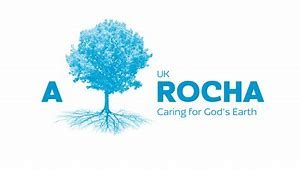 Mike started his talk with a brief introduction to A Rocha, a Christian Charity which sets out to help people who are adversely affected by climate change throughout the world, but lack the resources to deal with their situation.

Mike then went on to show graphically how the world’s population had remained fairly constant until the Industrial Revolution, at which point it started to grow exponentially, which, by definition, is unsustainable.

He then looked at the implications of the pursuit of growth as an economic driving force, and its implications on resources. The rising population meant that climate change, demand for nitrogen and potash based fertilisers, the rate of loss of species, ocean acidification, loss of fresh water and deforestation, were all being pushed towards their critical tipping point.

Mike described how each of these was affected in some detail, before focussing on climate change and the effect of greenhouse gases, namely CO2, methane and water vapour in the clouds. He talked about the Keeling curve, showing measurements of CO2 in a remote part of Hawaii, away from other sources of pollution, and how levels had risen since Keeling’s first records in 1958.

Using graphs from computer modelling, he showed that it was possible to predict the rise in global temperatures.  They are already up by 1 oC, with a minimum of another 1 oC rise expected.  The worst outcome could be a 6 oC rise by 2100.  These rises will lead to a more intense hydrological cycle, which in turn means more intense severe weather patterns.  The consequences of this are a rise in sea level, initially from the thermal expansion of the oceans, followed by melting glaciers and pack ice, and the encroachment of desserts, currently being measured in km per annum in parts of China.  Life supporting ecosystems could also be irreversibly damaged.

The IPCC, under the UN, regularly meet to try and find a way forward, and the Paris agreement on climate change in 2015 was a major step in the right direction.  We have the knowledge, the tools and possibly the time to address this. What is lacking is the political will to tackle the problems, which could ultimately lead to humans destroying their own planet! 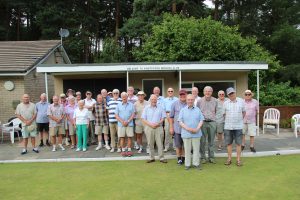 The Knutsford Rex & Church Hulme bowlers line up before the match.

The bowlers of Knutsford Rex and Church Hulme Probus greeting each other on a very sunny, hot and humid afternoon. It was decided by the two captains that due to the demanding conditions each game would be to 13 points rather than the normal 15. 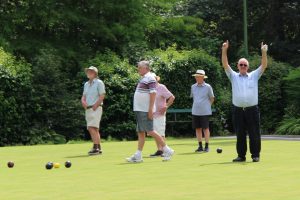 Church Hulme Probus have an impressive following to cheer on their team with expectations high as they did the double over Rex last season. However this season Knutsford Rex are a different proposition and on the back of seven successive victories the will to win was evident and by the time the match concluded Knutsford Rex made it eight consecutive wins chalking up a victory of 97 points to 60.

Next week is the annual bowls competition between Knutsford Rex and Knutsford Rotary Club. The match is held annually at the Great Warford green and strikes off at 6pm. The match is very much a social occasion when old friends meet to enjoy a summer evening. 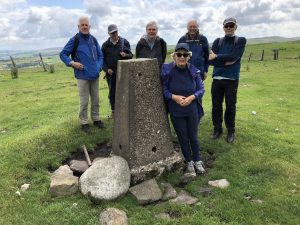 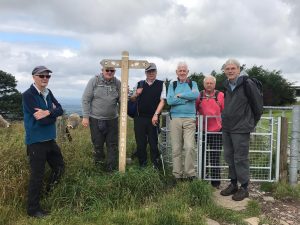 Six members and a guest went on a 5.5 mile walk from Lyme Park to Bowstonegate via the Lantern to Sponds Hill, the highest point of the Gritstone trail at 410 metres, returning to Lyme Park through Knightslow Woods. There are magnificent views from Sponds Hill including, Shutingslow to the South, Combs Moss and Ladder Hill to the East, Jodrell Bank and Beeston Castle to the West and Tame Valley and Saddleworth Moor to the North, to mention just a few landmarks. The weather was kind albeit with some rain in the early stages.  A well earned lunch was taken at the Red Lion in High Lane on the A6 just south of Hazel Grove. 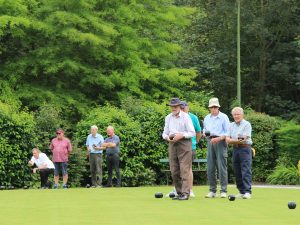 Another beautiful summers day, although rain forecasted for later, allowed Knutsford Rex to welcome Alderley Edge Probus to the Knutsford BC green.

It has to be said from the outset that Knutsford came out strong winners by 117 points to 66. However that is not really the story behind this victory. So much are Knutsford on form at the moment that they have introduced over recent weeks two relative novices to the team and by some astute pairings by captain Roger Collins the victories continue. Of course now playing in a winning team gives confidence to new players who hopefully will see the benefits of bowling for many years to come. A signal to any potential new member who fancies their arm.

Next week Knutsford Probus are at home again, this time hosting their friends from down the A50 Church Hulme Probus. 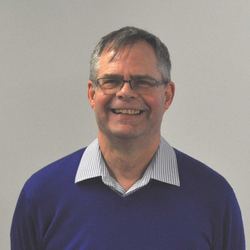 David started his talk with a brief resume of his past and his own personal interest in the American Civil War.

Whilst his talk primarily focussed on the Gettysburg address, it covered the period from the election of Abraham Lincoln as President of the US in 1861, followed by the start of the Civil War, with the Confederate Army’s attack on Fort Sumter a few months later, the Battle of Gettysburg in 1863, and a little beyond the end of the war in 1865.

David began by describing Abraham Lincoln’s Gettysburg address in November 1863, which lasted just two minutes and contained only 271 words. Lincoln’s speech followed a two hour oration by Edward Everett, who was a famous speaker of the day, but nobody remembers his speech. Lincoln’s speech, on the other hand, is engraved in full at the Lincoln Memorial at Gettysburg, and also at the Lincoln Memorial in Washington.

David also explained how the American Civil War had introduced the rifle, in place of the very inaccurate musket, and how the use of ‘Waterloo’ type battle tactics, led to a devastating loss of life, the likes of which had never been seen before.

The Battle of Gettysburg was seen as a major turning point, and is well known for having the highest number of casualties during the whole of the civil war. David described how the battle started and developed in great detail, and how the Union Army, under General George Meade, managed to put themselves in an extremely strong position, so that General Lee’s advances had disastrous consequences.

The American Civil War raged on for two more years. By the end of the war, nearly 2% of the American population had been killed on the battlefields.

David concluded his talk by stating that many of the dead soldiers were either buried in makeshift shallow graves, or buried where they fell. However, after the war, a number of well designed military cemeteries had been constructed, and the majority of the soldiers’ bodies have since been exhumed and reburied, with full military honours, in these cemeteries. 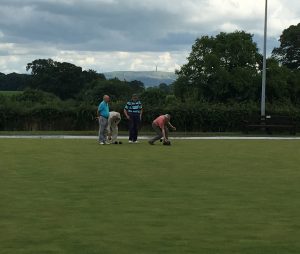 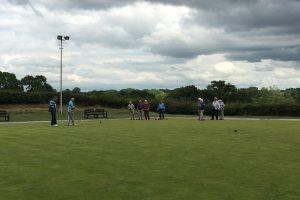 The picturesque Siddington green in all its splendour.

On a pleasant Wednesday afternoon Knutsford Rex bowlers visited the Siddington green to play their friends from Macclesfield 2 Probus.

On what is one of the more picturesque greens to visit the hosts gave a pleasant welcome to their visitors but once on the green the competitiveness from both teams came to the fore. Knutsford Rex are now on a rich vein of form having only lost once since the beginning of May and by the time the tally was made the visitors continued their winning ways in a 107-71 victory.

The current results list is making very pleasant reading and now the bowlers look forward to entertaining their friends from Alderley Edge next Wednesday 17th July confident of yet another victory. 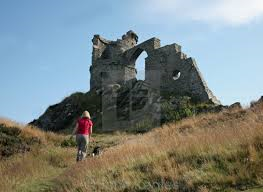 The walk at Mow Cop on Thursday, 4th July started at the Horse Shoe Inn.  Eight walkers set off in the sunshine for a gentle climb to Mow Cop, where they stopped for coffee, before making a detour to look at the Old Man of Mow folly.  They then took the steep route down and finished the walk at the Horse Shoe Inn, at 1.00 pm, in time for an excellent lunch. 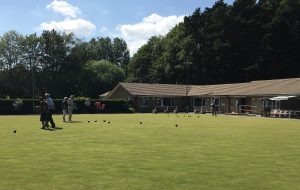 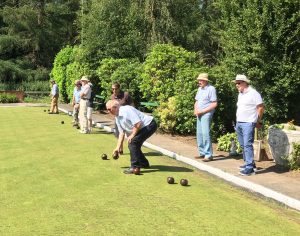 Bowling on an English Summer Day

On a beautiful warm summer afternoon Knutsford Rex hosted Weaver Probus on a return fixture from earlier in the season. In the first encounter it is fair to say that Weaver did not adapt to the early spring conditions so with a much larger green and ideal weather it was interesting to see how both teams matched.

In the first half it was obvious that the games were tight as it took in excess of an hour to play the first round of games which saw Weaver sneak ahead by 5 points at the eagerly anticipated tea break. In the second half the gentlemen of Knutsford Rex realising they had a game on their hands stood up to the mat and by winning all of the four second round games saw them take the spoils by 110 – 94. A somewhat flattering scoreline as two of the four games were very tight affairs again taking over an hour to complete

There is a chance of revenge when the two teams have a third encounter on the 4th September back on the Owly Wood green.