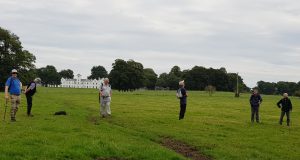 After the fantastic success of the KRPCs first official walk last week, the Rex walkers where out in force again as 9 congregated on Scott’s forecourt.  This was going to test the government COVID-19 rules, or so some may have thought, they did not reckon with our Walk’s Secretary – ‘Master Strategy’.  Scott’s grand plan was to despatch his forces off in 2 groups.  Firstly, a group of 4, including those who did not walk last week, to follow the route of the previous week’s walk to Ollerton, which Colin kindly agreed to lead again.  The second group of 5 headed further west to Smithy Green, led by Andy Whittaker.

Andy took us out via Beggarman’s Lane and through Sandfield Wood and past Ash Wood and through Ullardhall Farm.  It was along Ullardhall Lane that we met a fellow traveller; he was somewhat taciturn and resisted all attempts to recruit him to the club, although he did agree to have a photograph taken with us.  Eventually we arrived at our destination – Smithy Green – another delightful spot also with a ‘tree of idleness’ at its centre, this time a Copper Beach, for us to rest under and enjoy our coffee.  Spurred on by the thought of them sizzling sausages on Scott’s barbeque, we struck out at pace on our return journey past Victoria Woods (no sign of Julie Walters), past Toft Hall where we met 2 gentlemen going in the opposite direction, with whom we chatted for a while, but again failed to recruit to the Rex.  Across the Chelford Road into Gough’s Lane, through the snicket into Leycester Road back to Scott’s, where we were under strict orders to take the northern route into the back garden. The Ollerton 4 had been sent via the southern route. Seated in opposite corners Scott now Master Chef, treat us to them wonderful sizzling sausages as promised and again with an superb cold beer – this time courtesy of Jim Flett.

Our gratitude goes to the walk leaders – Colin and Andy, Jim for the beer and of course once again to Scott and Judy for opening up their garden to us again and them delicious sizzling sausages.

Specially restricted bowling practice sessions took place at Knutsford Bowling Club. It is hoped that these sessions may now continue. Sessions are currently every Monday 13:00 to 15:00. 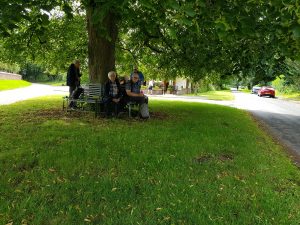 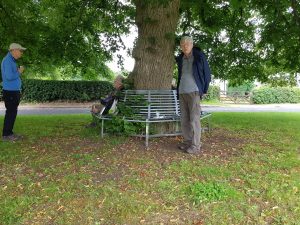 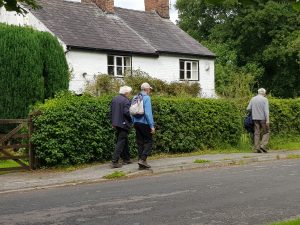 Its official! Walking is back!

Under the Government’s revised rules associated with the COVID-19 pandemic the Walking Group of the Rex held its first walk since the 5th March 2020, pre-lockdown.  So after an agonising 140 days of cruel abstinence, 6 pallid and sallow looking walkers, suffering from acute apósyrsi me ta podia syndrome, congregated in Scott Martin’s front garden and set off on a 5.5 mile walk led by Colin Bowman.   He took us south across Moss Wood, via Ash Farm to Lower Moss where we headed east into the outer reaches of Ollerton, there we stopped for coffee under what Lawrence Durrell may have described as ‘the tree of idleness’ in the centre of a delightful little green.   A lime tree planted to celebrate Queen Victoria’s diamond jubilee of 1897.  From her we struck out for home, along the Chelford Road into Ollerton itself, turning into Seven Sisters Lane, then Manor Lane and along Windmill Wood and eventually arriving back at Scott’s front garden, where Scott was already waiting having marched on ahead to fire up the ‘barbie’.

There we tarried for a while, scoffing the picnics we had brought, the sausages and burgers Scott had barbecued with the cold bottles of beer he generously provided, all the while continuing our erudite discussions on: sophistry, art and wit and other such rubbish.  Anyway, 6 members of the Rex left there a few inches taller, refreshed with rosy cheeks and a twinkle in the eye and a better view of life in general.  You cannot beat a good walk in good company, a good old gossip, a cold beer and of course a couple of excellent sausages to see the world in a better perspective.  So we will be out for another walk next Thursday. Its official!

Thank you Colin for leading us on such a lovely walk and very many thanks go to Scott and Judith for opening up their garden (and garage) and for the beer and sausages – heaven.

The club is saddened to report that Member John Todd died this morning, Wednesday 22nd July, in Macclesfield Hospital. John had tested positive for Covid-19 after recent heart surgery.

John joined the club in March 2018 and was a regular attendee at our meetings as well as a participant in the IT Group.

Details of John’s funeral will be posted as soon as they are known.