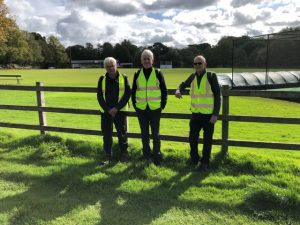 We were fortunate that the weather forecast was wrong and the showers held off to provide near perfect walking weather. Four walkers started out at the Church Inn, Mobberley to walk across the fields past Mobberley Hall Farm and Stubbs Farm to Newton Hall Lane. We walked a short distance along the lane and turned into Graveyard Lane passing Graveyard farm and the ancient burial site of the Quakers and the more recent humanist burial site. The track led us to Moss Lane and we walked to Knutsford Road turning left and walking along the wide grass verge to Sunny Bank Farm where we took the path which goes through a short tunnel under a farm building and walked across the fields to Antrobus Bridge.  We then proceeded along paths and across stiles that run parallel to Mobberley Brook passing Dam Head Farm arriving at The Roebuck and Bulls Head. We were tempted to call in for a  “swift half” but decided to finish our walk.

The final stage of our walk took us across fields and across Mobberley Brook once more,  along the rear of Mobberley Cricket Club and into St Wilfred’s Churchyard leaving by the lychgate and crossing Church Lane to arrive back at the Church Inn just in time for our Chairman’s arrival who was joining us for lunch.  The walk was just over 4.5 miles and was based on a walk suggested by the Church Inn.  There were four walkers, including walk leader Scott Martin. The lunch was very enjoyable with the usual high standard of food and ale that the Church inn provides. 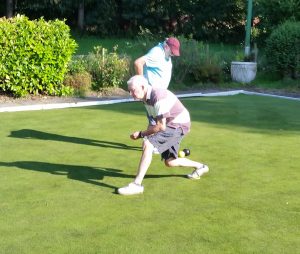 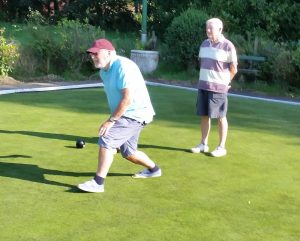 Each bowler played 2 rounds against a fellow drawn bowler for a total of 11 ends. The four highest points scorer played in a semi final and the winners then to contest the final.

The weather was perfect and all bowlers enjoyed the afternoon. In the end the final was to be played out between Terry Parkinson and Alan Allcock. Terry had been on form throughout the afternoon and he carried that form to the final winning by an impressive margin of 11-2.

The annual trophy was presented by this years Rex Club Chairman Jim Flett. 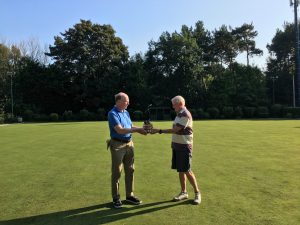 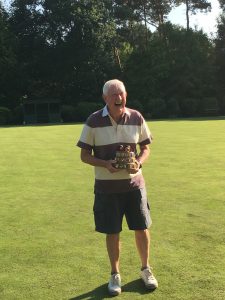 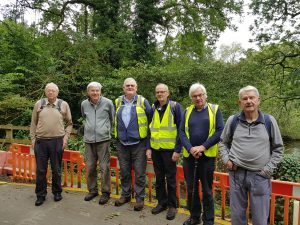 The Magnificent Seven walk for the last time….

….. well; until the next Boris Directive.  We went to Plumley and reprised part of a walk last done on the 18 June 2015.  The first walk led by David Howard, a figure of eight walk am/pm, the two loops separated by lunch at the Golden Pheasant.  David led the walk again, around the shorter (3.8 miles) pm section, to the south-west of Plumley. The walk was kept shorter than is usual, to allow some of those walking to also attend the IT discussion group beforehand.

Starting at the Golden Pheasant we proceeded in an easterly direction along Plumley Moor Road, before going off piste across the fields by Holly Tree Farm across Trouthall Lane and along Cheadle Lane. Eventually turning north-west along farm tracks past Holford Moss and the Plumley Lime Beds Nature Reserve and skirting around the ancient Holford Hall.  Another wedding venue, there seems to be a pattern emerging here.  After a short bash up the very busy A556, we cut back across the wheat-fields, newly harvested, with the farmer in the process of baling the hay and back past the railway station to the pub.

Someone reminisced that on the walk in 2015 the late Gilmore Stubbs regaled the group of how the royal train had once parked in a siding at the station overnight and this seems to be so:

‘The day the Duke spent the night

It’s royal past is way above its station.

But the Duke of Edinburgh’s one-night stand is still remembered by local train enthusiasts.

The Royal Train was shunted into the sidings at Plumley Train Station in 1957 – and stayed the night. “It’s part of the annals of the line because it was a prestigious occasion,” said Wilson Hamman, of Lowe Drive, Knutsford.

We were joined for lunch by Jim, where, given the improved weather we were able to dine alfresco. 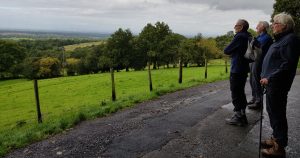 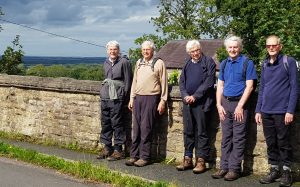 To the Edge of the Peak.

This week 6 of us spread our wings a bit further, starting and ending at The Windmill Inn at Whitely Green.  In spite of fake news being broadcast by David Howard that there were major road closures around Prestbury by Cheshire East for road repairs, everyone arrived on time.

Led by Jerry Bentley we headed towards the Macclesfield Canal where we joined ‘The Cheshire Ring Canal Walk’ for a short distance before turning east past Styperson Pool and climbing a part of the way to Nab’s Head past Breck Quarries.  On reaching Long Lane, we went south over Beeston Brow to Bollington where we found our way into the delightful recreation ground by the River Dean, where we stopped for coffee overlooking the cricket pitch, sadly the covers where on, no play today.  Refreshed we climbed up onto the viaduct to join the Middlewood Way which follows the disused Macclesfield, Marple and Bollington Railway.  After a short walk south we were able to cross back onto the canal tow path for a leisurely stroll past Clarence Mills north to Whitely Green and lunch at The Windmill Inn, hoorah!

Thanks Jerry great walk, all 5.5 miles of it.