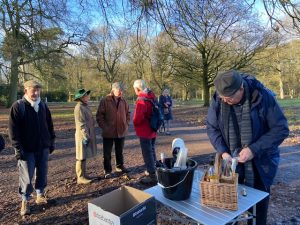 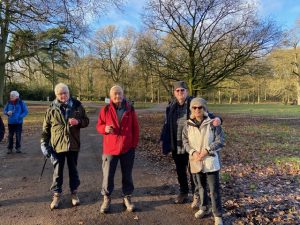 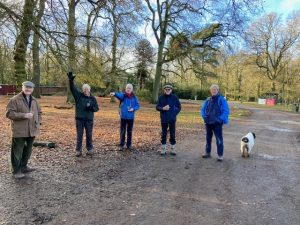 At 10.15am on Thursday 17th December 2020 eleven walkers set off in pleasant winter weather for our annual Christmas walk in Tatton Park, split in two groups one led by Scott Martin and the other led by David Howard.

Both groups walked separately to Old Hall and returned on different routes. The walks took just less than two hours including a stop for coffee.

Due to the Covid-19 restrictions we could not visit a local restaurant for lunch, an annual event where the walkers are typically joined by other members and wives / partners.

As this was the final club event in a troubled year, socially distanced Christmas cake, mince pies and drinks – a choice of water, wine, cognac, calvados and malt whisky, were enjoyed by the walkers and other members of the club, at the end of the walk.  Jim Flett, Chairman wished everyone a Merry Christmas and glasses were raised in a formal toast to the club! 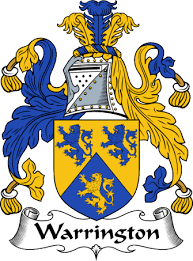 Diana started her talk with a brief history of Warrington, its history and development, from Roman times when it was called ‘Wilderpool’, the Bronze Age and the middle ages when it became a market town and a bridging point for the river Mersey.  The first recorded bridge dates back to 1285.  It was strategically important during the Civil War, and later became well known for wine making, brewing, tanning and sail making.  Sail cloth was transported down the Mersey to Liverpool and then by sea to London.
She then looked at a number of Warrington families who had influenced some of the major institutions in the UK, namely the Barnes family, the Percivals, the Aikens, the Gaskells and the Websters.

Dr Thomas Barnes, MD DD, lived from the mid-18th century until the start of the 19th.  He was educated at Warrington Grammar School, followed by Warrington Academy.  The Academy was founded in 1757 as an educational establishment for Unitarianism until it closed in 1786.  Early tutors included Joseph Priestly and William Enfield.  Dr Enfield was the grandfather of Prof Sir Henry Enfield Roscoe, 2nd Professor of Chemistry at Owens College, Manchester.  Priestly is well known for his work on the Periodic table in Chemistry.  Dr Thomas Barnes became a Unitarian Minister in Bolton, before moving to Cross Street Unitarian Chapel in Manchester. In 1781, together with Dr Thomas Percival and the Chemist Thomas Henry, they formed the Manchester Literary and Philosophical Society, then in 1786 Dr Thomas Barnes became the Principal of the Manchester Academy, which took over from the Warrington Academy.  The Barnes family funded the building of two hospitals and a significant number of educational establishments in the area.

The Percivals had been farmers in the 16th and 17th centuries, until Dr Thomas Percival took up medicine.  Also educated at Warrington Grammar and Warrington Academy, he completed his medical training at Edinburgh University, which would accept Unitarians.  After practicing in Warrington, he moved to Manchester where he became the first President of the Manchester Literary and Philosophical Society and a founder member of the Board of Health.  Here he developed the Percivilian Code which is still used today as a code for medical ethics. His daughter Anne, married Nathaniel Heywood, whose father founded Heywood’s Bank, which became known as the Manchester Bank.  Their son Benjamin became the first Baronet of Heywood, and their daughter Mary founded the Mothers’ Union.

John Aikin was one of the first Unitarian Tutors at Warrington Academy.  His son, also John, was a physician and author who, with his sister, published an illustrated book about the countryside around Manchester.  His sister, Anna Leticia Barbauld was a poet, essayist, literary critic and author of children’s literature.  She was married to a Unitarian Minister and ran Palgrave Academy in Suffolk.  Barbauld Street in Warrington is named after her.

Arthur Aiken, son of the younger John, was a lecturer in Chemistry at Guys Hospital in London.  He was the Secretary to the Royal Society of Arts for 22 years and in 1840 founded the Chemistry Society in London, which is now the Royal Society of Chemistry.  Arthur’s younger brother Edmond, became a founder member of the London Architectural Society.

The Gaskells were farmers before becoming sailcloth manufacturers.  Then came the Holbrook Gaskells.  The first became a business partner of James Nasmyth, a Scottish engineer, and founded the heavy engineering firm Nasmyth Gaskell and Co. in Salford.  He then left Nasmyth and joined Henry Deacon to form the Gaskell Deacon chemical works at Widnes.  Here they made alkalis using the LeBlanc process, which was used to produce sodium carbonate from common salt.  His son took over the works until this plant, together with numerous others in Widnes, became part of ICI.  Moving on a generation, his son became a director of ICI in 1926.

Walter Holbrook Gaskell, MD, LLD, FRS, was a Physiologist who laid the foundations of the pathology of the heart in the 1880’s.

Reverend William Gaskell became a Minister of the Cross Street Chapel in Manchester in 1828.  He married Elizabeth Stevenson.  They initially lived and practised in Warrington.  Elizabeth became a famous author and their house, owned by Manchester University, has been recently restored.  William’s younger brother Samuel, was a Psychiatrist and brought about many reforms to the lunatic asylums of the day.  He founded what is now known as the Royal Society of Psychiatrists which awards a Gaskell medal and prize for academic distinction in clinical psychiatry.  There is a building in Manchester Royal Infirmary named after him.

John James Webster, M.I.C.E., was born in Warrington.  He worked for Bellhouse & Co. whilst studying at Owen’s College, now University of Manchester. Here he specialised in bridge design, and later became the Chief of the Bridge Dept at Thomas Brassey and Sons, Birkenhead.  He then started his own practice in Liverpool and designed bridges all over the world.  These include the Widnes to Runcorn transporter bridge which was in use until 1961 and a smaller transporter bridge at Warrington, which is still in use today.  His final design was the reinforced concrete bridge at Bridgefoot in Warrington.

Diana then took questions from an appreciative audience.

Even though the walk was arranged at short notice following the end of the second lockdown there were six walkers for a local walk of 4 miles starting at 10am and finishing at 12noon.  The walkers set off from Legh Road and went to Windmill Woods and Toft Woods via Goughs Lane and Chelford Road.  The next stage of the walk was towards Toft Hall and across to Bexton Hall for a coffee stop. The final stage was to walk across the “Ways” estate and back to Legh Road where we enjoyed a quick socially distanced beer in Scott Martin’s garden. The weather was cold but not as wet as was forecast. The walkers agreed that it was great to have the freedom to be walking as a group once more. Look out for details of the annual Christmas walk in Tatton on 17th December 2020 – details to be published soon.