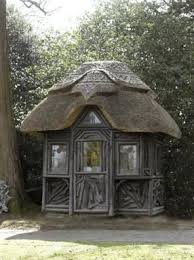 David started his talk with a brief introduction about the Caesar’s summer house business, and how it had come to his attention.  A former KRPC member had found four Henry and Julius Caesar Garden and Rustic House brochures in the loft of an old barn in Brook Street, Knutsford, and donated them to Knutsford Heritage Centre.  Although the brochures were produced in the first half of the 20th century, the designs and awards go back to the late 19th century. David decided to find out more about the company and its history.

The business was based in Knutsford, roughly where the Aldi supermarket is now.  It specialised in upmarket rustic summer houses, including one design which was produced for Queen Victoria.  Henry and Julius Caesar’s summer houses had been extensively exhibited all over the country, and had won over 200 awards, which were listed in the brochures.  David had managed to find a photograph of Adams Hill which clearly showed the summer house building works.  It included a locomotive shed, which dated the photograph to about 1860.

David decided to look into the Caesar’s family background, and found that they originally lived in London.  What made the family move to Knutsford is far from clear, but there were known to be good business opportunities in the Cheshire area at the time.  Henry Caesar ran the summer house business from 1871 until his death in 1891, when his wife, Jane, took over and ran the business until 1906.

The Power Brothers then took over the business.  They had previously been carriage builders and designers, and the family originally lived in Salop, now Shropshire.  They moved to Aboyne in Scotland when the family worked as gamekeepers on a large estate, before moving back south to Knutsford.
The business was later taken over by Drinkwater, who ran it until it closed in 1939.

David produced some current photographs of some of the summer houses, which clearly show the rustic designs outlined in the original brochure.  He also showed some photographs of the family home, called ‘Caesar’s Place’, which incorporated a rustic arch and a thatched rustic porch.  Sadly, the last photograph of the house showed it being demolished.

David’s investigation of the Caesar family started with Henry’s parents.  He then found that he could contact Henry’s living descendants, which provided more family information, including another brochure, which pre-dated the original four.  Henry Caesar’s daughter, Dora, had been a Knutsford Royal May Queen in 1898, and the family remained actively involved in the Knutsford May Day parades for some time.  Jane Caesar retired from the business and moved to the Lake District, where she lived until she died in 1944 at the age of 94.

David concluded his talk with a Caesar group family photograph, with Jane in the back row, directly behind her daughter Dora, with all the family dressed for May day.

David then took questions from the audience.

11th February 2021 – Club Meeting – Speaker, Mr Dave Walmsley, who give a talk entitled ‘Henry V and the Battle of Agincourt.’

Dave started his talk with a brief look at the Shakespearian version of Henry V’s reign, and the subsequent films that had been based upon the play.  He then started to look at the known history of the era to see how accurate, or otherwise, these accounts were.  Beginning with William the Conqueror, Dave gave an illustrated presentation of the Kings and Queens of England and France, together with maps of the territory which they controlled.  Significantly Henry Anjou’s marriage to Eleanor Aquitaine in the 12th century meant that King Henry II of England reigned over more than half of France.  This did not last.  Richard I squandered the wealth of the empire and bequeathed a bankrupt Kingdom to King John.  King Philip of France was the main beneficiary of this, which set the background for the ensuing wars between England and France.  In short, English rulers were trying to hold on to, or regain Normandy and the lands which had been controlled by King Henry II and Queen Eleanor, especially the South West Bordeaux region.  The French rulers were trying to exert their authority over the whole of France and oppose French regions which were trying to resist the influence of the French Crown with the support of the English.

Kings Edward I and Edward II decided to focus their efforts on gaining control of Wales and Scotland, and whilst Wales became a vassal state, the Scots had no intentions of following suit. Robert the Bruce defeated the English Army at the Battle of Bannockburn.

France was heading for a constitutional crisis.  King Philip IV had three sons and a daughter. The daughter was married to King Edward II.  When the last of Philip’s sons, Charles IV, died, there was no obvious male successor, but permitting a female successor meant putting King Edward III on the French throne.  The French opted for King Philip IV’s nephew, and he was crowned King Philip VI.  This set the scene for the English monarchy to claim that they had a legitimate claim to the French throne.

King Edward III had a twofold problem.  Firstly, his efforts in Scotland and his raids on French ports were achieving very little.  Secondly, the French king was exploiting his position as overlord of Aquitaine, and then he seized control of both Aquitaine and Ponthieu.

Until now, King Edward III’s claim to the French throne had been a political manoeuvre, but now it had become much more than that, and led to the start of what is now known as the 100 Years’ War.  However, in spite of some successes, the French approach was to wait for Edward III’s money to run out.  His successor, King Richard II sought peace with France, in spite of serious opposition from three of his uncles.  Richard either had his opponents executed or exiled, and Prince Henry was banished to France.  King Richard II felt safe, but in 1399, Henry returned whilst Richard was in Ireland.  Besieged at Conway by Henry’s forces, Richard II abdicated and King Henry IV took the throne for what proved to be a very difficult reign. He faced rebellions in 1403 and 1405, was unsuccessful against Scotland and the wars with France had been abandoned.  He died in 1412.  Although King Henry V succeeded King Henry IV, Edmund Mortimer, the 5th Earl of March, had a more legitimate claim to the throne. King Henry IV’s actions had given his son a dangerous legacy, and King Henry V had two ambitious brothers.  His prospects were not good.  However, he was very good at managing propaganda.  Working with the Church enabled him to appear pious, and he also pardoned and restored the fortunes to the families who had been condemned by his father. The church gave him financial support to fight France for what he claimed was his legitimate right to the French throne. This enabled him to gain further funding for an invasion of France.

The French invasion did not go to plan.  Harfleur was sieged as planned, but it took far too long, and many English troops died from dysentery.  However, he still had 9,000 of the 12,000 men who had crossed the channel.  Refusing to accept the setback at Harfleur, they marched towards Calais, which meant crossing the river Somme. After crossing the river, they confronted the French at Agincourt.  The English had learnt a great deal from the battle of Bannockburn, but the French had not learnt from their earlier battles.  Their horses became bogged down in the mud and became easy targets for the English archers.  Weighed down by their armour, many French noblemen became stuck in the mud and were slaughtered.  Accounts vary, but it is estimated that the French troops numbered between 12,000 and 36,000 men.  Either way, they were heavily defeated.

Dave described the English troops in great detail, together with the extensive training that they had received.  The invasion had taken four years to prepare. In short, in October 1415, a small, but very professional army killed a large number of poorly led French troops – mud, mayhem and massacre.  However, this was not the end.  There were further invasions and battles until 1429, when Joan of Arc led the French to victory, and their fortunes changed.  The English were defeated at a number of battles and finally, in 1475, all English claims to the French throne were abandoned.

Dave concluded his talk by saying that King Henry V was a good general, good at selecting his ministers and extremely good at propaganda, but his aim was unachievable.  The French would never accept an English King.