Club Meetings at Mere were still cancelled due to the Coronavirus pandemic. A series of Zoom Meetings were arranged throughout the month. 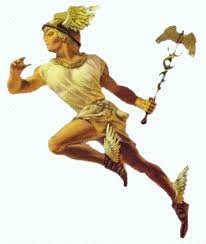 Nigel started his talk by stating that he was going to cover the developments of over 4,000 years of human endeavour in one morning – starting with the earliest communities and leading up to the highly developed organised societies of today.

The ‘Winged Messenger’ was an ancient god. The Romans called him Mercury and the Ancient Greeks called him Hermes. He was the messenger of the gods.  He carried a staff, which contained the message, which was protected by two serpents for security.  His winged feet and hat denoted speed.  The symbol of Mercury has been adopted by the Royal Signals Corps on their badge, with the motto ‘Swift and Sure’ in Latin.

Nigel then focussed on message delivery by hand. The first marathon dates back to 490 BC when a message was carried 26 miles by hand in Greece.  Message delivery is recorded in 1516 under Henry VIII, by the Master of the Posts, then Charles I introduced the first public post service in 1635, followed by the opening of the first Post Office in 1660.  1784 saw the arrival of the first mail coaches, and in 1840 the uniform one penny charge for mail was introduced using stamps.  Today Royal Mail delivers over 60 million items per day.

Messages also travelled by sea. In 1561, fast unarmed sailing ships carried messages, or ‘packets’, between Ireland and Wales.  The Packet ship trade grew and in 1689 Falmouth sailed 40 Packet ships all over the world.

Homing pigeons have been widely used to carry messages by air since the days of Julius Caesar.  During WW1, the British Army had 20,000 birds.  They were even used for the D-day landings in WW2.

Other forms of sending messages involved transmission of one kind or another. Romans used beacons to give line of sight messages, smoke signals and drums have also been used.  However, telegraph signals did not appear until 1792, when Chappe set up the first French national telegraph system.  A series of 556 towers carried a system of semaphore poles which could be used to signal text over 2983 miles.  In 1795 the British Admiralty set up a comparable shutter telegraph system, which remained in use until 1816.  The Popham telegraph operated from 1822 to 1847 using two movable arms on a tower.  All of these systems required daylight, line of sight and clear visibility.  This was no good for the telegraphy needed for a growing railway network.

The electrical telegraph system was first used in 1837 over a two mile length of cable, and used a five compass needle system to pick out letters of the alphabet.  The spare capacity was used by the railway companies for news and telegram transmission.  Samuel Morse then invented the Morse code, which was first used in 1844, and went on to become the international standard for telegraphy.

Cross channel cables were installed in 1850, but failed a year later and had to be replaced.  In 1858 the first Trans-Atlantic cable had a similar fate. However, under the leadership of John Pender, in a company which is now Cable and Wireless, by 1866 he had the network working.  This was followed by Australia in 1872, South America in 1873 and the world by 1902.

Voice transmission by telephone, using both cable and radio, grew rapidly in popularity, and 1973 saw the arrival of the cellular phone.  Vodaphone set up the first UK mobile phone network in 1985 and by 2019 the mobile system had developed from 1G to 5G.  There are now more mobile phones in the UK than people!

Computer development after WW2 led to the introduction of the ‘World Wide Web’ or internet, where computers communicate with each other.  The development of broadband saw the demand for data transmission surge.  The growing need for more data transmission led to the development of fibre optic cable.  A glass fibre the thickness of a human hair can carry 40,000 circuits.  95% of internet traffic is transmitted over fibre optic cable.  Computers can be linked to others, forming an intergalactic computer network, collectively known as ‘the cloud’.  Devices and controllers can be linked to the cloud to automatically carry out functions on our behalf.

Nigel concluded his talk by stating that the world is totally dependent upon our ability to communicate.  We started with hand written messages and have evolved to the point where computers talk to computers.  The fundamental requirements underlining all of these processes are speed, connectivity, reliability and security.  All four are essential for communication.

Nigel then took questions from a very appreciative audience.

11th March 2021 – Club Meeting – Speaker Andy Whitaker, who give a talk entitled ‘Penicillin, a History of its Discovery and Development.’ 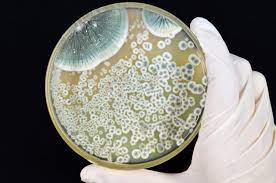 Andy introduced his talk by stating that as a Chemical Engineer, he had been tasked by his manager to write a report on a penicillin production plant in Bulgaria.  Although Andy knew nothing about penicillin, he found himself on a long journey by air to Sofia, followed by a twelve-hour car journey to the plant in north eastern Bulgaria.  During the car journey, he was joined by Peter Russell, an expert on penicillin, who gave him a very good twelve-hour lesson on the history of penicillin!

Andy gave an overview of bacteria, how they had evolved, and how some had become harmful, causing diseases.  These were called ‘pathogens’, and the toxins produced by pathogens cause illness and sometimes death.  The first effective medicine against pathogens was a sulphur-based drug produced by Bayer during the 1930s.  However, in 1928, Alexander Fleming was nurturing some streptococcal bacteria in a sample dish, and whilst he was on holiday, some mould developed, and on his return, found that the mould had killed some of the bacteria.  The mould was a form of penicillium. He tried unsuccessfully to isolate penicillin from the mould, wrote a couple of papers on the subject, lost interest and moved on to another project.

Howard Florey was an Australian doctor with an Australian degree in medicine.  He won a scholarship to Magdalen College, Oxford, which in turn led to him gaining further scholarships to both Cambridge and the USA, funded by the Rockefeller Foundation.  He gained a PhD and became the Chair of Pathology at the Sir William Dunn School of Pathology, Oxford.  Here he led a small team of researchers including Ernst Boris Chain and Norman Heatley. They looked into the earlier paper produced by Alexander Fleming, and focussed on extracting the active ingredient that killed bacteria.  Underfunded and only using available materials during wartime conditions, in 1940 they managed to produce a strain of penicillin of sufficient purity to try it on 8 white mice.  All of the mice were given an infection, and test results showed that the four mice treated with penicillin recovered, whilst the others died.  A penicillin factory was set up in the school and they scaled up the extraction machine.  Early trials began at the Radcliffe Hospital under Doctor Charles Fletcher.  They discovered that the human body was very good at getting penicillin out of the system, so whilst the early results were very successful, they ran out of penicillin and the first patients died.  In spite of these setbacks, Dr Florey’s wife Ethel set up and ran a penicillin ward at the Radcliffe Hospital with great success and wrote a book on how to administer penicillin.

British companies were invited to take up penicillin production, but turned it down, leading to the Rockefeller Foundation drawing the team to the USA.  Here they found that upscaling production was very difficult, and they searched for alternative sources of mould.  A lady called Mary Hunt was tasked with obtaining mouldy food, and the team found that a mouldy melon enabled them to produce penicillin chrysogenum which could be mass produced.  Senior officials pressurised American drug companies to take on the task.  Pfizer were experts at deep tank fermentation. They took over an old ice cream factory and adapted it to produce penicillin on an industrial scale.  All of the output went to the US military and their allies.

In the UK, Harry Lambert was cured of bacterial meningitis using penicillin obtained from Howard Florey and administered by Alexander Fleming.  The ensuing press release gave all of the credit to Alexander Fleming, a claim supported by St Mary’s Hospital’s top brass.

In Yale in the US, a miscarriage led to sepsis and Norman Heatley advised the doctors on penicillin treatment.  The Hirst news organisation got hold of the story, giving them a great scoop.  This led to penicillin being released from the US military and made available for use by the general public.

Andy concluded his talk with a reference to Dorothy Hodgkin’s discovery of the formula for penicillin, which enabled synthetic production of the drug which is still used in production today.

Andy then took questions from an appreciative audience.