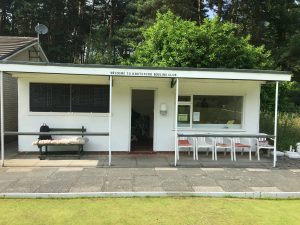 On a sunny afternoon Knutsford Rex entertained their friends from Weaver Probus. The competition between the two clubs has always been friendly competitive and this encounter was no different. At the break Knutsford was leading by 8 chalks and on the final tally the 8 point gap was maintained with the final score being 71-63.

Next week Knutsford Rex are away to Macclesfield 2. 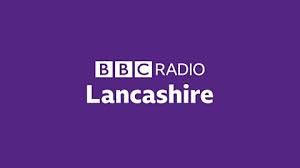 John started his talk by stating that he was hoping that today’s presentation would have been a normal meeting, and not one using zoom.

He was born in Wigan, and had been fascinated by radio from an early age, when radios were regarded as a piece of furniture.  He is now semi-retired, but had been the Managing Editor at Radio Lancashire, and a Producer before that.  He had worked in radio for over forty years.  John’s initial introduction to radio was through hospital radio, but this did little to prepare him for professional broadcasting.  He wrote to every Radio Station in the country looking for work, and eventually ended up with a job as a presenter on Manchester’s commercial radio station, Radio Piccadilly.  He was broadcasting between 2 am and 6 am each morning!

He learnt a great deal about listening, and realised that many people see radio as a companion.  Unlike television, it is often used as a background for other activities.  The most important job is keeping people company.  He received numerous letters from listeners, often six pages long, giving their life stories.

John then became a producer for a presenter called Mike Sweeney.  Mike came from Salford and had a very strong local accent, and was generally regarded as a bit of a rough diamond.  In 1978, there was a radical approach to encouraging local dialects on Local Radio, and the audience figures soared.  As a producer, John learned the importance of checking facts and ensuring that the presenter had interesting guests.

John told numerous amusing stories about events in Radio Lancashire, including the fact that local radio invented the ‘phone in’ radio programmes.  These programmes are fraught with danger as editorial control is impossible, but the programmes worked well when people disagreed.  There were also very popular advisory phone-in programmes, such as one where an antique dealer would give valuations over the radio.

John concluded his talk with a story about a sound effect of a turkey.  It was included in a programme which had numerous random farm animal sound effects, and ‘Tommy the turkey’ was introduced as a bird which was going to be fattened up for Christmas.  It was allegedly fed on pies!  The radio station started receiving food for the turkey!  Then, at John’s behest, they introduced a sound effect of carving knives being sharpened. This had the effect of upsetting a vegetarian traffic presenter.  She started crying on air.  The programme then started receiving hate mail!  Eventually, after a long team meeting, John announced on air that Tommy the Turkey had been sent to Bernard Matthews in Norfolk to work in the capacity of a stud turkey.  That was not the end of the story.  The station then started receiving postcards, with a Norfolk post mark, saying how much Tommy the turkey was enjoying life in Norfolk!  Not bad for a sound effect. 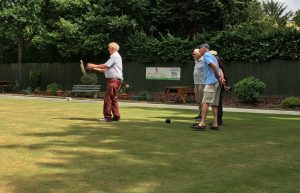 Local bragging rites were up for grabs as the Rex bowlers visited the Crosstown Bowling Club to play their neighbours Tatton Probus. Due to the recent good weather the green was running very fast which was a challenge to even experienced bowlers but the 8 matches were, with only a couple of exceptions, tight affairs. The final tally of 102 to 92 in favour of Tatton was a fair result but was close enough to make the return fixture later in the season a greatly anticipated encounter.

A group of 5 ascended  the Higher Ridgegate and then circumnavigated the Macclesfield  Forest, followed by lunch. [Full report later] 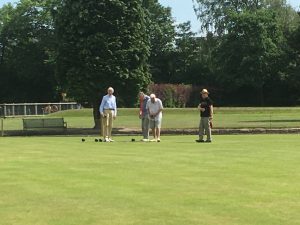 On a beautiful sunny June morning the Knutsford Rex bowlers visited Alderley Park for their fixture versus Alderley Edge Probus. Due to last years restrictions it was almost 2 years since the last visit and to the green owners credit the surface has been completely transformed to an excellent surface. There could be little excuses for any below par performances and it is good to report that the Knutsford team rose to the challenge. A victory of 77 points to 46 made the journey back to Knutsford pleasurable to say the least.

Next Tuesday afternoon, 22nd June, Knutsford Rex will be visiting Crosstown Bowling Club for their local derby against Tatton Probus. This rivalry goes back many years so a mouthwatering fixture is in the offering. 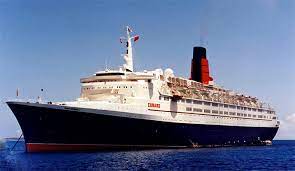 Brian started his talk by reminding members that this was the third time he had given a presentation to KRPC.  The first covered his ‘Runaway to Sea’ life story and the second was about the building of Cunard’s QE2.  This talk was about numerous events that happened during his career working as an officer on cruise ships.

He described how he had been impressed at the start of his maritime career by hearing of the bravery of a captain who stayed on his sinking cargo ship in the middle of the Atlantic Ocean, right up until the ship literally disappeared beneath him, when he was then rescued.  Brian emphasised how the captain is in command of his ship everywhere except the Panama Canal, and should not normally leave his vessel when at sea.

However, his first anecdote described a captain who was one of the first to leave his ship when the ship went aground and hit a rock.  The captain circled the ship in a lifeboat before returning on board.

He had been sailing too close to an island in the Caribbean to show how well he knew the waters when the incident happened.  Sadly, a number of people died during this event and the captain ended up in prison.

In 1965, Brian had been working at sea for about two years when the ship he was on received an SOS halfway across the Atlantic Ocean.  The steel cargo had shifted in rough seas and the cargo boat was sinking.  An oil tanker also came to the rescue, and by pouring oil onto the sea, the water became calm enough for Brian’s ship to lower a lifeboat and save eight of the twelve-man crew.

One of the more memorable anecdotes occurred on the QE2, during the New York stevedores’ dock strike. The Seamen’s Union decided to support the stevedores, and it was left to the ship’s officers to load and unload the ship.  One of Brian’s tasks was to drive the cars off the ship onto the harbour for customs inspection.  He particularly remembers a Jaguar with a Marseilles registration plate.  The customs officials directed him to drive the car to an adjoining dock where it was weighed.  It was found to be packed full of drugs.  This set the background for the film ‘The French Connection’.  Cunard were given the opportunity to have the QE2 featured in the film, but they declined the offer and a cargo ship was used instead.

On another occasion, the QE2 responded to an SOS and sped from St Lucia to Mustique. A ship had sailed too close to the island, gone aground and started to break up.  This had started a fire, and by the time the QE2 reached Mustique, the stricken ship was ablaze from end to end.  Fortunately, all of the passengers and crew had already been taken ashore, were now sitting on the beach and nobody was injured.

Brian told many other stories, including the SAS landing in the sea during an Atlantic crossing to investigate a bomb threat, and an incident when Brian and another crew member rescued a passenger who had fallen off the gangplank.  They were in dock in the Canary Islands at the time, and the man ended up face down in the water.  A combination of CPR and oxygen revived him, and he was then stretchered off to hospital.  Brian was awarded a certificate from the British Humane Society for his efforts in saving the man’s life.

Brian then took questions from an appreciative audience.

On a pleasant afternoon the Knutsford team made the short journey to the outskirts of Holmes Chapel to play Church Hulme Probus. The picturesque Cranage green witnessed a very close match with the Knutsford team leading at the half time break. Unfortunately for them Church Hulme rallied in teh second half to come out winners by 99-91.

Next Tuesday morning, 15th June, the team are on the road again when they visit Alderley Park to play Alderley Edge Probus 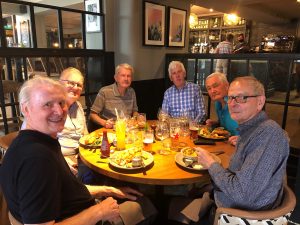 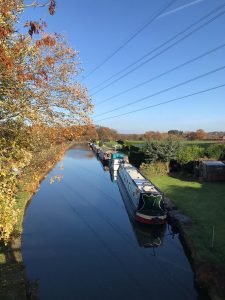 There were five walkers and one member joined us for lunch. From the main car park at Lyme we walked up to the Cage and down to the admissions hut following a track and paths to the Macclesfield Canal and Middlewood Way passing the Nelson Pit Visitor Centre and back into the park via Lyme Road and back down to the car park.  The walk was a little under five miles and took 2hours 30 minutes including a coffee stop by the canal. A pint and an excellent lunch, as always, at the Red Lion at High Lane. 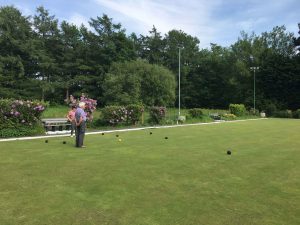 On a sunny summer afternoon Rex entertained their friends from Fulshaw Probus on the immaculate Knutsford Bowling Club green. On the back of last weeks win the Knutsford team were full of confidence which was well founded as they put in a performance befitting the weather. In the first half the Knutsford team brought in two excellent wins by more than 10 points to set up nicely for the second half. The games in the second period were of a much closer contest but on the final tally the score of 102-86 sealed the match in favour of the home team.