The walk was scheduled to start from Redesmere however, the A34 was closed for resurfacing but somehow 5 members managed to make it to the start. The walk went past Siddington Church, across fields to Marton and round back to Redesmere. A dry most enjoyable 4.5 mile walk. The walkers then drove to the Egerton Arms, Chelford for a good lunch. 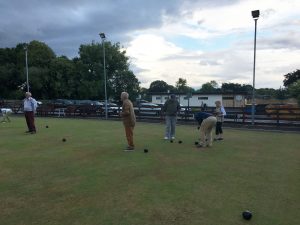 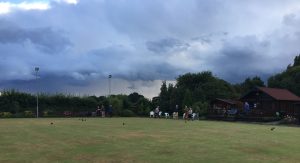 Photos show the angry skies but fortunately the weather stayed away from the Warford Green.

The weather during the day had been producing some heavy rain showers and up to an hour before the match was under threat of having to submit to the elements. The good news was that the weather eased for the fixture to take place despite threatening clouds and the occasional clap of thunder.

The game against Knutsford Rotary is more of a social affair with the Rotary playing host on the Warford Green. A fine spread of refreshments were on offer after the game which everyone enjoyed. As far as the actual match was concerned Knutsford Rex came out on top by 94 points to 26 points. It has to be said however as far as the points tally was concerned nobody was really counting and all left for home in good spirits and still friends. 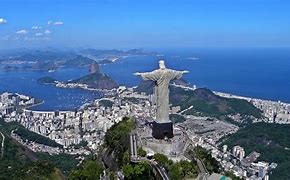 The Chairman then introduced the Speaker whose talk was entitled ‘South American Journey: Travelling to Brazil, Uruguay and Argentina’.

Mrs Griffiths reported on a 41 day voyage on a Fred Olsen Cruise Line where she acted as Destination Speaker. The cruise visited Madeira, Tenerife and Cape Verde before arriving in South America. Various ports were visited in the 3 countries and highlights included taking 2 cable cars to reach the summit of Sugar Loaf Mountain and experiencing the unforgettable Rio Carnival.

David Bryant gave the vote of thanks and complimented the Speaker on an excellent presentation. 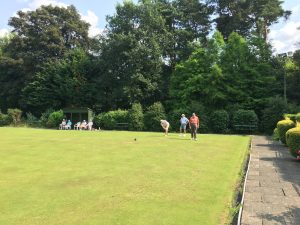 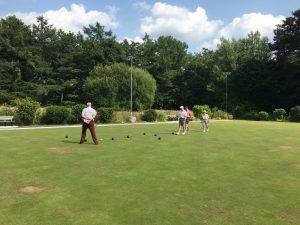 On what was one of the hottest afternoons of the year so far Knutsford Rex welcomed Church Hulme Probus to their Knutsford Bowling Club green.

A revised format for the match was decided upon due to the heat but that did not dilute the competitiveness of the fixture. Knutsford were on the path for revenge to their defeat away at Church Hulme in early June. In the end Knutsford went home with the satisfaction of a win by 66 points to 45 points.

Next week on WEDNESDAY EVENING Knutsford Rex Probus will be entertained by Knutsford Rotary Club at their Warford Park green. 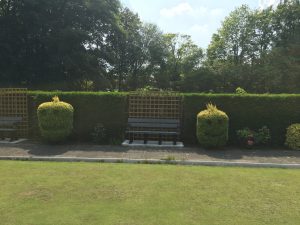 Even the bushes showed their glee at another Rex Probus win. 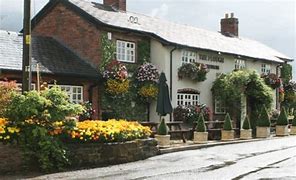 Six walkers embarked on a 5-mile walk starting at the old railway station at Whitegate. Coffee was taken on the benches at St Mary’s Church and a very good lunch was enjoyed at the Plough Inn. 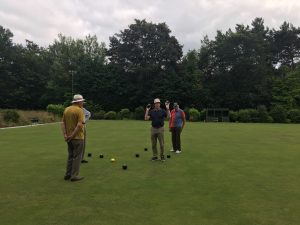 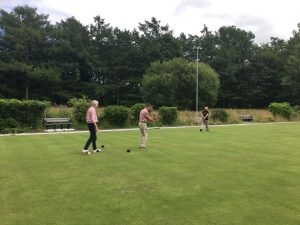 Another beautiful summers day at the Knutsford Bowling Club green where Knutsford Rex entertained their friends from Alderley Edge Probus.

The two teams met in June where the Knutsford Rex beat Alderley Edge quite convincingly and from the off it was obvious that the visitors wanted to make more of a game of it. And so it was as the total points came in at 81 to 67 in favour of the home team. It must be said however that Knutsford did come in with two rather big wins which in all probability tipped the scales.

Next week Knutsford Rex entertain Church Hulme Probus which will give the home team a chance to revenge last months defeat at Cranage. 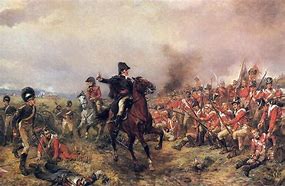 David commenced his talk by giving a history lesson of Britain/France events from the Norman Conquest to the late 18th century. Napoleon was born in Corsica and was the son of minor aristocracy. He later joined the French army and became a specialist in gunnery. As a result of victories in battles in Italy and Egypt he was made First Consul in 1799. At the battle of Marengo in 1800 the French drove the Austrians out of northern Italy. In 1802 Napoleon became Master of France. Britain tried to contain France’s ambitions by being the main funder of coalition forces against Napoleon. However, in 1805 the coalition of Russia, Prussia and Austrians were defeated and Napoleon was crowned Emperor in 1806. Napoleon consolidated his standing by marrying the daughter of the Austrian Emperor and by 1810 effectively controlled the whole of Europe.

Sir Arthur Wellesley (Duke of Wellington) was of minor Irish aristocracy. Educated at Eton he had a lacklustre army career until he bought the rank of Lieutenant Colonel. He made his name by winning battles in India and in the Peninsular war. By 1813 he was the most celebrated military person in Britain.

In 1812 Napoleon invaded Russia. The Russians adopted a scorched earth policy to deny the French food and after besieging Moscow the winter set in and Napoleon was forced to retreat. In the battle of Leipzig in 1813 Napoleon was defeated and the successful Allies ordered Napoleon to be exiled in Elba. However, Napoleon was not closely monitored and on March 1 he re-entered France with 1142 men and proclaimed Emperor again on March 13th.

A coalition of British, Prussians, Austrians and Russians formed an army of 600,000 men to confront Napoleon. The Prussians were led by Blucher and the British by Wellington though their armies were some distance apart. On 18 June 1815 Napoleon attacks Blucher at Ligny and forces Blucher to retreat. Fortunately, Blucher retreats north to be near Wellington who also retreats towards Brussels and camps on a ridge named Mont St Jean. The French pound the ridge with a 30-minute artillery barrage using 80 guns and then the French infantry and cavalry advance. Wellington had formed his army into 13 squares which the French could not break. The British and Prussians then advance and the French retreat back to Paris. Napoleon was forced into exile on St Helena whilst Wellington became Prime Minister in 1828-1830 and given £15M by a grateful nation. 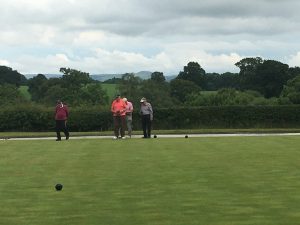 After a morning of heavy showers the weather relented to allow the bowlers from Macclesfield 2 to host Knutsford Rex at their very impressive Siddington green. The match was very competitive and only interrupted by a short shower which some sturdy sportsman continued despite the rain. The sportsmanship was excellent in spite of the match being exceptionally close. It was unfortunate that there had to be a loser and it is a credit to all bowlers that Macclesfield 2 took the match by one single point in a score of 92-91. 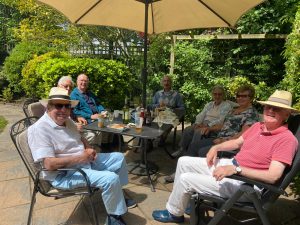 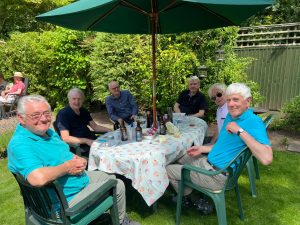 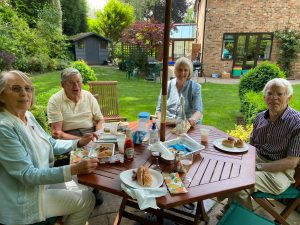 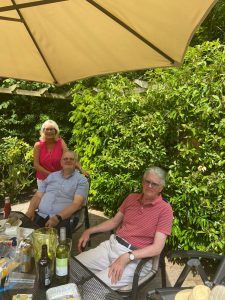 Scott and his wife Judith kindly invited members and partners to an informal lunch in his garden on Legh Road. The lunch was timed to coincide with the finish of the Walking Group’s ramble near to his home. (See separate report.)

Seven members started at Aston by Budworth, continued through Arley Green, across the M6, Hobbs Hill and back across the M6. An easy walk of under 5 miles.

Three walkers did a 2 mile walk around Sandfield Wood and Bexton Hall.

After the walk both sets of walkers adjourned to Scott and Judith Martin’s house for a barbeque which was open to all members and wives. Just under 20 people attended and a fine time was had by all.