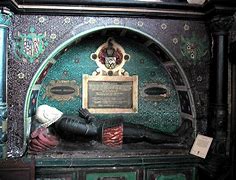 Tony’s talk was about Sir George Beeston (1520 to 1601) who lived at Beeston Hall, Bunbury. He joined the navy and rose to become a Naval Commander. Although not as well-known as Jack Hawkins, Francis Drake, Thomas Howard or Martin Frobisher, he helped to defeat the Spanish Armada in 1588. He was knighted on the Ark Royal at the age of 68. A monument to him can be found in the church of St Boniface in Bunbury. 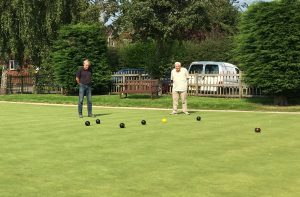 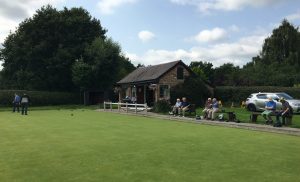 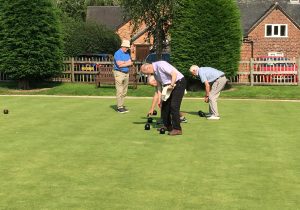 A beautiful sunny day took the bowlers from Knutsford to one of the most beautiful bowling green settings situated in the village of Great Budworth.

The Budworth green is not a venue where the visitors can say they have history on their side as far as results were concerned. Todays game unfortunately went the same way with Appleton coming out winners by 70 points to 63. As the home team captain summed up the proceedings he did mention that the difference in the score was from the match where the two regular players on the green teamed up to score well against their opponents. There should be some consolation in that, but very little, and there will hopefully be a chance of revenge when Appleton travel to Knutsford on the 29th September.

Next week Knutsford Rex visit the Owley Wood Green in Northwich to take on the challenge from Weaver Probus. On this occasion it is on a Wednesday morning, 1st September, 10:00. 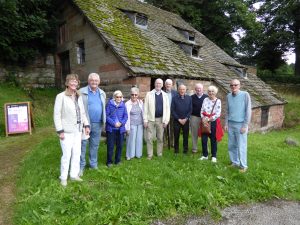 The first post pandemic outing took members and partners to the relatively local National Trust’s Nether Alderley Mill. The weather improved from the morning to make the visit extremely enjoyable.

Nether Alderley Mill is a 16th-century watermill located in Congleton Road, to the south of the village of Nether Alderley, Cheshire, England. It is owned by the National Trust, and is recorded in the National Heritage List for England as a designated Grade II* listed building. It is a unique example of a triple overshot waterwheel system, two of which are in working order. It is one of only four virtually complete corn mills in Cheshire.

After their tour of the mill the party adjourned to the Nether Alderley Parish Hall for tea and cakes.

Five long walkers met at 10am at The Crown Inn for a 5 mile walk around Goostrey passing through a large corn field, ice cream farm, turf farm, potato field before finishing the walk at 12.30pm, in time for a good lunch.

The short walkers had also met at the same place, same time for a 1.5 mile walk through ‘The Bongs’.

Georgina explained that she has been addressing audiences for 25 years and teaches public speaking. She advised that one must project confidence when public speaking and this can only arise through sound and extensive preparation. She gave examples of mistakes she had made during her early life and how she corrected them. The myths of public speaking were examined and advise given that fears must be confronted not hidden away from. A wide ranging and highly confident talk that also managed to include quotations from Shakespeare and Abraham Lincoln. Georgina then took questions from an appreciative audience. 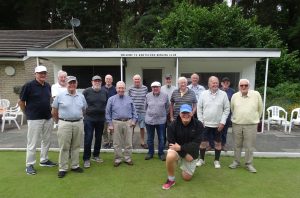 A big day in the “Probus” sporting calendar is the annual contest between Knutsford Rex and Knutsford Tatton Probus Clubs. The trophy for this match is in memory of George Tyror who was an active member in both clubs holding senior positions for many years until his passing a few years ago.

It was Knutsford Rex who were hosting the event for 2021 at their Knutsford Bowling Club green although due to Coronavirus the cup was not contested in 2020. Rex being the previous winners, however Tatton had previously a long run in holding the trophy.

It was obvious from the off that both teams were keen to lift the trophy and measuring tapes were called probably more than usual as neither side would give an inch in their quest for victory. By half time Knutsford Rex had a lead but was not beyond any reasonable challenge from Tatton. As the second half progressed the first match to complete was a comprehensive Tatton victory which almost wiped out the Knutsford Rex victory from the first half. Fortunately for Knutsford Rex the remaining games produced the necessary points for the victory by 81-69 and all smiles as their captain Roger Collins lifted the trophy once again from opposition captain John Baldwin. 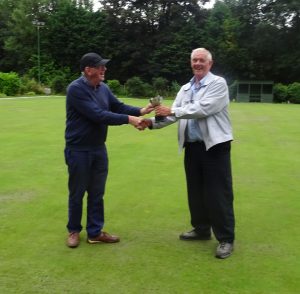 Knutsford Rex have no match next week but the following week, 25th August, they travel to the beautifully located Great Budworth Bowling Club green to play Appleton Probus.

The walk started at the Dog Inn, Peover Heath for a 5 mile circuit taking in Peover Hall and Peover Eye across fields and through woods and back to the Dog where the group met the short walkers who had completed a 2 mile walk. An excellent lunch was enjoyed by all at the Dog Inn. 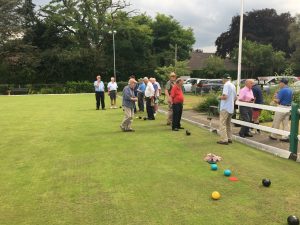 Wilmslow Fulshaw and Knutsford Rex prepare for the afternoons match.

Knutsford Rex travelled to Wilmslow Bowling Club to meet up with their friends from Wilmslow Fulshaw Probus. The fixture has traditionally been a very tight affair with Fulshaw being able to field a team of experienced bowlers who have a wealth of experience playing the home green. The match started in beautiful sunshine with a forecast for rain around 4pm. As the first half concluded it looked as though the forecast could well be right as some heavy cloud cover came over. The interval showed Knutsford leading by the small margin of 4 points. As the second half progressed the weather became more threatening and with one match concluded the other three were curtailed because of the rain. With the points total being recorded as at the end of proceedings the Knutsford Probus bowlers were all smiles as they came out victors by the smallest of margins of 82 points to 76.

Next week the special fixture of the Tatton Cup is being played between local rivals Knutsford Rex and Tatton probus. The match this season is at Knutsford Bowling Cup with a 2pm start.