Paul concentrated his talk on two Powers of Attorney namely Property & Affairs and Health & Welfare. He outlined the advantages of having LPAs in place. If no LPA is completed then the alternative is to apply to the Court of Protection for a Deputyship which is expensive and a lengthy procedure. On a show of hands Paul congratulated the members on the high take up of LPAs but noted that 80% of over 65-year-olds do not. Paul answered many questions from an appreciative audience. [Please note that any text on this website relating to information on LPA’s is given without prejudice and any member wishing to consider taking out an LPA should seek legal advice beforehand.] 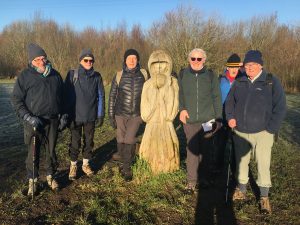 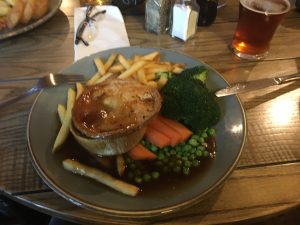 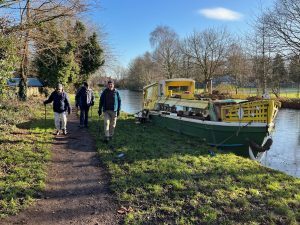 Seven walkers set off from the Rams Head to take the almost 5 mile route around the Grappenhall area visiting the Wizard of the Woods, Grappenhall Heys and the Dingle. The weather was perfect with the frost enabling the previously muddy surface to be quite dry. The walkers having worked up a good appetite on return to the Rams Head, met a further four short walkers to enjoy some excellent food.

Don died on 29th December 2021 at the age of 91.  Don trained professionally as a Civil Engineer and worked on some very large projects, both at home and abroad. After retirement he moved to Knutsford and joined Rex Probus in 2010. Don served as the Rex Dining Secretary from 2012 to 2015. He and his wife, Sheila, came to all the Christmas and Summer Lunches. They also came on several of the Club Holidays, and were also regular supporters of the Bridge Section. Don passed away peacefully at home with his family by his side. Rest in peace, Don. 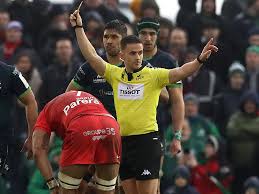 Due to the Covid pandemic Mr Martin Buck gave his presentation via Zoom. Martin explained how Rugby had changed over the years and how referees have had to become more professional. Referees explain their decisions and players respond by treating referees with respect and never questioning decisions. The contrast with the behaviour of football players is stark Martin observed. Mr Buck then took questions from an appreciative audience. 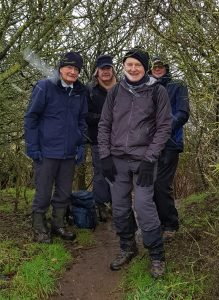 A convenient shelter for a coffee.

Five walkers met at the Frozen Mop, Mobberley for a circular route past Wayne Rooney’s small cottage. The weather was a mix of gales and sleet which could be described as character forming. The walkers returned to the Frozen Mop where Jim Flett joined them for a well-deserved meal.