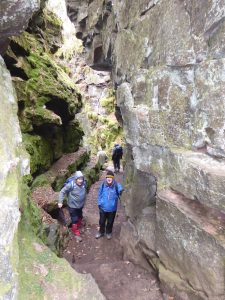 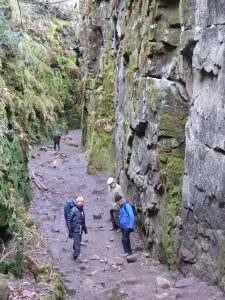 The Walking Group took a ramble to Luds Church which is a deep, moss covered chasm full of history, myths, and dark green wherever you look.  To walk down its stone steps deep into the cleft is to escape to another world.

After this unique walk the party met up with other members to enjoy lunch at The Reform Inn.

Richard gave a wide ranging, highly interesting talk about his previous experiences. His first story concerned his first school trip as an arts teacher to Rome and how he had separated from the group one Saturday night and very nearly lost the location of the hotel. We will draw a veil over the lady of the night posing on the bonnet of a sports car. Richard’s second story concerned the flamboyant, larger than life, jazz singer and raconteur, George Melly. Richard and George became friends and Richard painted a picture of George’s life and times and their experiences together.

This weeks walk on Thursday 17th March started and finished at the Churchill Tree Gastro Pub in  Alderley Park. The walk took in the site of ICI/Astra Zeneca Headquarters which covered a vast area of beautiful countryside now available for the use of the general public. The walkers met up with a group of “short walkers” for a well earned lunch at the Churchill Tree pub where the12 diners enjoyed the fine fare. 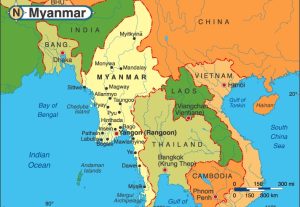 Judith and Stephen explained that they had travelled extensively throughout the world but their favourite country was undoubtedly Burma. The talk encompassed Yangon where the Shwedagan Paya’s spire contained 5448 diamonds, many rubies and topped by a 76-carat diamond. Also mentioned was Bagan which used to contain 10,000 shrines and temples, the stunning city of Mandalay and their favourite, Lake Inle. The talk was accompanied by Stephen’s wonderful photographs. 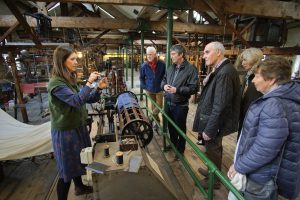 Members and partners engaged in a visit to the Silk Museum and Paradise Mill, Macclesfield. The accompanied tours and demonstrations, particularly on restored Jacquard Looms, were highly interesting and educational.

Macclesfield Silk Museum and Paradise Mill are situated adjacent to each other on Park Lane in the heart of Macclesfield.

Paradise Mill was built in the 1860’s and from about 1890 it was dedicated to hand loom weaving of the finest silk on 19th century Jacquard looms. After its closure in the 1980’s the mill and the machinery were restored to show how they would have been in the early part of the last century. The guided tour includes an introduction to the history of the silk industry in Macclesfield and a working demonstration of the 19th century hand looms producing fine silk cloth.

Macclesfield Silk Museum tells the whole story of Macclesfield as a silk town from the earliest days of silk button making up to its heyday in the first half of the 20th century as one of the leading places for the manufacture of silk cloth. The museum is full of artefacts, textiles and machinery from all periods and is also at present running a special exhibition “Macc Stripe” of recently restored silk fabric and silk dresses from the 1920’s to the 1940’s.

11 members took the 4.9 mile walk from the Egerton Arms, Chelford across fields and the Macclesfield Road to the sand pits where 3 large lakes form a nature reserve for the benefit of wild life and fauna. Although the weather was challenging at times the hardy bunch completed the walk back at the Egerton Arms. At the pub they were met by 3 short walkers who had a wander around Dog Wood. They of course all enjoyed a good lunch.